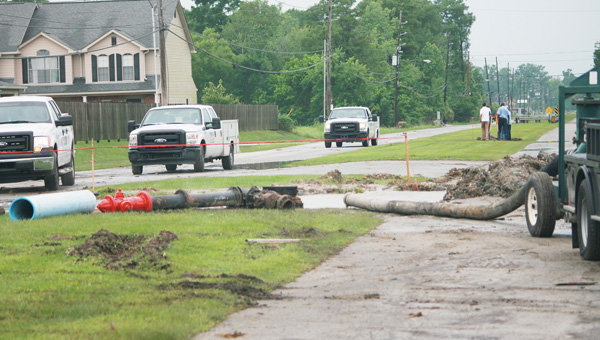 LAPLACE — Gene Franques was sitting at his house in the Woodlands Subdivision when he got an alert on his cellphone from the St. John the Baptist Parish Sunday afternoon telling him he would be experiencing low water pressure.

“Sure enough I got up and I go to turn on the water in the sink and, I mean, there was no pressure whatsoever,” he said. “I guess it wasn’t until around 9:30 p.m. that the trickle starting coming in. We also got phone calls saying don’t open all of the faucets in the house, to allow the pressure to build back up.”

Franques, after getting the call and the alert to boil water, said he turned off everything in his house that needed water.

“It took until 11:30 (Sunday night) that I had enough pressure to even take a shower,” he said. “When I was coming home from Chili’s (Monday) I found out the boil water advisory was still in effect. It’s still affecting everybody.”

St. John Parish Communications Director Baileigh Rebowe Helm said the reason Franques and 20,000 other residents and businesses lost water was because a vehicle struck a fire hydrant on Woodland Drive in LaPlace Sunday, causing a break in the main water line.

“I would say that people were without water for four and a half hours,” she said. “When the motorist hit the line, it was a main line and workers had to isolate the leak. Our water towers were dropping because it was such a significant leak.”

The hydrant that was struck was near the intersection of Woodland Drive and Indigo Parkway.

Director of Utilities Blake Fogleman said when the vehicle hit the hydrant it broke the main line down in the ground.

“On Sunday we went down there and made a temporary fix just to try and bring the pressure back up for residents and provide water back to the system,” Fogleman said. “We were able to do so overnight, and (Monday) we continued our efforts to actually fully isolate the leak location and repair it properly for the long haul.”

Fogleman said the motorist who struck the hydrant actually hit the T going to the hydrant.

“We are cutting out that T and replacing it with a straight piece of pipe,” he said. “Once we can clean up that sight, we can come back in and insert the hydrant back. We’re going to isolate the line itself, cut the line off and cut out that section that includes that T that’s broke and put in new pipe.”

Along with busting the water main when the car hit the fire hydrant, a sinkhole also appeared.

“The sinkhole was due to the pressure from our system,” Fogleman said. “In most instances on a leak like that, you’re going to see some form of that type of hole. As the water comes out of our pipes and washes away all of the dirt as it flows, it brings the dirt with it. Unfortunately, in that location there is a lot of sand. When we get a lot of sand, you have a lot of it falling in and it doesn’t hold the whole, as well as other types of dirt, and actually creates a larger hole.”

St. John Sheriff’s Office spokeswoman Angel Thompson saud at the time of the wreck Sunday, the motorist was alone. Thompson said the driver was not injured or cited.