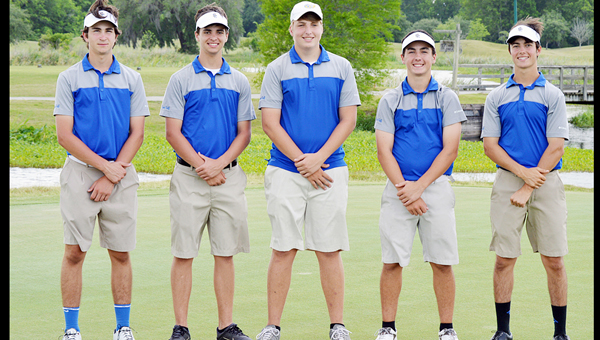 LAPLACE — As Jacob Jensen sank his putt on the last hole at Atchafalaya Golf Course in Patterson Tuesday, he knew something was going on.

As the ball went in to seal his score of 79 on the day, Comets fans, followers and his teammates let out a yell.

“I knew something was up,” Jensen said.

With that putt, Jensen had just sealed St. Charles Catholic’s third place finish in the Division III, Region II golf tournament, sending the entire team to the State Tournament to be held Monday and Tuesday at Farm d’Allie in Lafayette.

It will be the Comets’ first appearance as a team since 2012.

This year’s team of  Jensen, Landry, Jeffrey Cupit, Daniel Joubert, and Will Torres finished with a score of 312 to take third place behind University High (305) and the Dunham School (306).

“It was extremely close,” St. Charles coach Gary Zeringue said. “As I was watching the scores come in, I knew we would have to beat one of the four. We ended up jumping over all four of them.”

The Comets were again led by Landry, who shot an even par 72. Cupit finished at 80, Joubert shot 86 and Torres shot 81.

Landry had to overcome a rough start on the front nine, where he shot a 37 and had zero birdies through eight holes.

“My first tee shot went into the woods, then I three-putted a couple of holes,” he said. “I could not make a putt, not even from eight feet. Putting is about confidence, and I just had no confidence. Then, something just sparked on No. 9.”

Landry made five birdies from holes 10 through 18, finishing with a 35 on the back nine.

Zeringue said he knew Landry, who focuses solely on the sport of golf, would find his way back to form.

“I’m not worried about him,” Zeringue said.

“He’s in rarefied air up there.”

This day Zeringue was waiting on Jensen, the last Comets golfer to come in with the final group.

“We were waiting for him, and everyone had their phones out, using their calculators,” Zeringue said. “His score was enough for us to jump over Catholic of New Iberia.”

Jensen said he knew it would come down to a couple of strokes.

“I just tried to keep my confidence up,” he said. “I had to stay focused.”

Jensen even got a made-for-TV moment as the crowd cheered his arrival back at the club house.

“That was a great feeling,” he said. “It was pretty cool.”

Zeringue is pretty proud of his team. Although St. Charles has sent several teams to state over the years, including one every year from 2008 to 2012, the school last won a team golf title in 1982.

“It was fun last year,” Landry said. “My family is from Lafayette so I got to hang out with a lot of my family. It’ll be more fun this year because I’ll be with my friends.”

Zeringue has been saying all spring that this team was special and could achieve great things.

“Golf is such an individual sport,” Zeringue said. “You can see your teammates out there on the course on occasion, but you’re out there by yourself and you have to focus on every shot. It’s easy to not have the team mentality out there. I though we really had that team mentality to pull it off. I’m extremely proud of my players.”