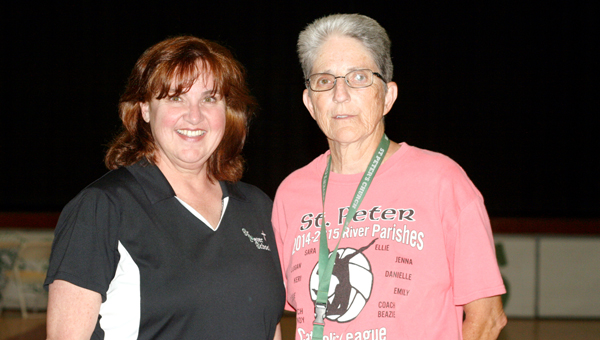 RESERVE — It all started because she wanted to be a coach.

When Mary Beazie Maurin graduated Leon Godchaux High School in 1969, to become a coach at a school, you had to also be an educator, and that’s what Maurin did.

Mary Beazie Maurin looks over her ‘crazy kickball,’ which she keeps together with tape for students at St. Peter Catholic School. Maurin has been teaching for more than 40 years.

“I wanted to coach volleyball and softball, those are what I played when I was in high school,” she said.

“I went to Nicholls State in Thibodaux, where I got my BS in physical science and my Master+30. I feel like everything worked out. I’m not rich moneywise but look at all of the lives that I’ve touched.”

Maurin is the health and physical education teacher at St. Peter Catholic School in Reserve.

Including her time teaching physical science in the public school system, for 23 years, Maurin has been teaching St. John students for 43 years.

Students play and learn the fundamentals of traditional sports like basketball and softball, along with playing games people haven’t heard of before.

“Take softball for example,” she said. “We would work on the basic skills of throwing and catching, then we would learn a little bit about the sport itself. Then we would try to incorporate all of the rules and regulations as the unit went along. We would probably play lead up before we would play the game.

“That’s what I do with the younger kids, it’s more about lead up than the game itself. We work more with skills with them.”

Out of all the games she plays with the kids Maurin said her students seem to enjoy pickle ball and crazy kickball.

Pickle ball is a game with a net set at three feet, and the students hit a whiffle ball with paddles. It’s played on a badminton court.

In crazy kickball, students play with five bases, and home is in the center.

You kick a ball, which is made up of triangles, and when it lands, it lands on a certain number.

If a player kicks it and it lands on the No. 2, then the kicker has to run from home to first then to second base without getting out.

Maurin said crazy kickball is a combination of softball, soccer and baseball. Unfortunately, she said no one makes the equipment used for the game anymore so she tries to keep the toys in the best condition she can.

Occasionally Maurin said she would search the Internet looking for equipment but hasn’t found any.

“My favorite part of my job is just seeing the kids’ faces and seeing how happy they can be,” she said. “The hardest part is when they leave to go to another school. I miss them. Same with the kids that move away.”

Georgia Knight, a friend and colleague of Maurin, believes physical education is important.

“To me, if kids had more time in P.E. their test scores would soar,” she said. “Kids, now, don’t get enough exercise. Things like P.E., music and art are the first things to go during budget cuts, and it’s such a shame.”

Knight, a reading and language arts and former physical education teacher, said Maurin teaches students much more than how to play a sport.

“Play is so important,” she said.

“Some people may think it’s a waste of time, but it’s not. You’re building on their social skills, and they are learning how to cooperate, get along and solve problems when they’re playing.”

Maurin and Knight agreed through physical education classes, students learn about other subjects through the use of math to calculate scores or scientific method when using a bat to hit a ball.

“They are lucky to have (Maurin),” Knight said. “She really teaches them sports and the enjoyment of it, but she incorporates a lot of other subjects without the kids even realizing it.”