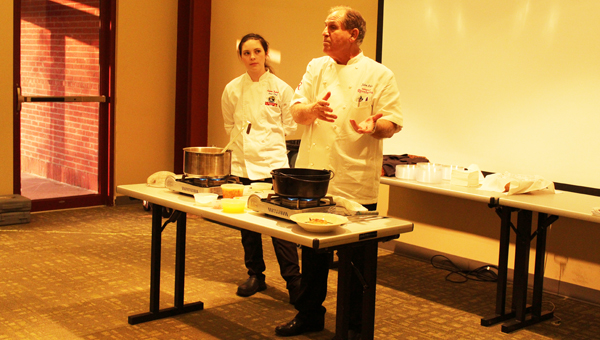 Chef John Folse works in front of a LaPlace audience Tuesday at the library.

LAPLACE — The Central Library in LaPlace welcomed Chef John Folse this week as he spoke about his experiences throughout his career and cooked a cuisine called “Crawfish Cardinale” for all who attended.

Folse is respected around the world as a leading authority on Cajun and Creole culture and cuisine.

He grew up in a family of sugarcane farmers and great cooks, learning at a young age to utilize ingredients from the swamp floor pantry of south Louisiana’s Bayou Country. His presentation Tuesday was titled, “From Swamp Floor to Table: The Origin of Flavor.”

Folse has his own Culinary Institute located on the campus of Nicholls State University in Thibodaux. He has two Louisiana restaurants; Lafitte’s Landing and Restaurant R’evolution. Folse has published nine cookbooks, one novel, two children’s books and hosts his own television series and radio shows.

He also has his own manufacturing plant, where his famous products are made and then can be sold through his company’s store.