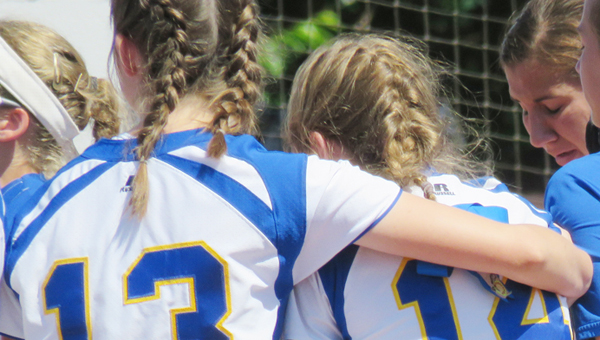 St. Charles Catholic’s Hailey St. Martin, No. 13, and Caroline Julian, No. 14, console each other after Saturday’s 3-2 loss to Mangham.

RESERVE — For the past 15 years, the Louisiana High School Athletic Association has crowned its softball champions in the small western Louisiana town of Sulphur.

In each of the past 13 years, at least one of the two private schools in St. John the Baptist Parish have been there to contend.

Riverside Academy’s Janie Milioto mourns the end of the Lady Rebels’ season after a 7-4 loss to Doyle Friday. (Lori Lyons/L’OBSERVATEUR)

For the first time since 2004, neither St. Charles Catholic nor Riverside Academy will be making the trip after both were bumped out of the Class 2A bracket in the second round last week.

Oddly enough, the Lady Rebels were defeated by an Old Comet who once was a Rebel. Doyle is now coached by former St. Charles player Sarah Decell (formerly Savoie) who spent her inaugural year as an assistant coach at Riverside. This will be her team’s first trip to Sulphur since 2008.

“I’ve been wanting them to go. They need to experience it.”

Decell and the Tigers figured they would have their work cut out for them against Riverside, (24-7) the team that led the nation in home runs this season with 42 going into Friday’s game. It was the Tigers who did the hard hitting, however.

Doyle’s solid lineup pounded 14 hits off of a pair of Riverside pitchers and jumped on starter Cheyenne Triche with five runs off of five hits in the first inning.

Riverside coach Tamra Regalo said her team had a hard time after falling behind early and were kept off-balance by Doyle pitcher Olivia Welda’s off-speed pitches.

The sophomore held the Rebels to seven hits.

Trailing 3-2 in the seventh inning with one out, St. Charles had runners at first and second after Lela Hill walked and Grace Mohon sent a flare into left field. Destiny Wesley hit a pop up, but no infield fly rule was called.

Mangham was unable to make the catch, but Hill hesitated before breaking for third.

The base umpire called Hill out at third and Wesley safe, despite pleas from the Mangham dugout for a double play ruling, which would have ended the game.

It was all for naught, however, as Caroline Julian struck out looking to end the game.

The Comets (23-4) had taken a 1-0 lead in the third inning when Hill and Wesley hit a pair of doubles.

Mangham would score the rest of its runs in the top of the fourth inning on a trio of singles. The Comets added one in the bottom of the inning on a solo home run by Maddie Cochran.

St. Charles coach Ty Monica had predicted a bumpy road to Sulphur for 2A teams this season, and was even nervous about his team’s first-round opponent, Delcambre.

“I think Class 2A is loaded with talent this year,” Monica said. “That’s obvious just by looking at the teams in front of us. There are some really good teams that aren’t going to make it to Sulphur this year and they probably deserve to.”

The Rebels had been to the tournament every year since 2009. The Comets missed the trip in 2014 for the first time since 2004.