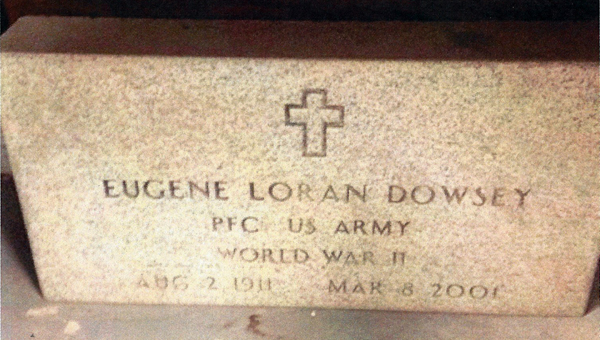 The above grave marker was found lying alongside Highway 51 several years ago. St. John the Baptist Parish Sheriff’s Deputy Faron ‘Slim’ Duhe, who works in the Crime Scene Investigations unit, has been searching for the family of the man on the stone. Duhe located the family in March in Picayune, Miss., and was told the name was misspelled. No one knows how the stone ended up in LaPlace. (Raquel Derganz Baker/L’OBSERVATEUR)

LAPLACE — Deputy Faron “Slim” Duhe has worked for the St. John the Baptist Parish Sheriff’s Office for 26 years — the past year serving in the Crime Scene Investigation Department as a purger.

St. John the Baptist Parish Sheriff’s Deputy Faron ‘Slim’ Duhe, a member of the CSI Unit, solved the mystery of the grave stone that was found lying alongside Old 51. Duhe was recently recognized as Deputy of the Month by the St. John Business Association for his dedication and investigative work.

“I purge evidence from the past,” he said. “Whether it’s drugs, guns or property, I more or less put folders together on each item. Then I turn that over to the DA’s office, who brings it to the courthouse to decide if the evidence has cause to be purged or not.”

Duhe is responsible for taking evidence to its designated area for destruction to make sure it is properly destroyed.

When Duhe first started his job he laid his hands on one particularly interesting piece of evidence, a grave marker.

“It was the first piece I touched because I actually had to move it to put my desk in place,” he said. “Ever since then, it’s been placed underneath my desk because there was no other place to put it.”

As time went on and Duhe caught up with work, he asked his supervisor, Capt. Kirt Tregre, if he could try to find the owner of the gravestone and possibly return it. With his supervisors’ blessing, Duhe said he started looking for the owner last month.

He describes the gravestone as a 2×1 marble stone that would be placed in the ground. Written on it is the name of a Eugene Loran Dowsey. Duhe said the stone was found off of Old 51 before he joined the CSI department.

Duhe did what most people would do, he looked in the white pages. Unfortunately, he was unable to find any Dowseys, so he asked for help from Capt. Tregre.

“What we did was put the name into a program used only by law enforcement,” Tregre said. “We tried a few names but had no successes. So we tried to put the date of birth in and it came back to a different spelling of the last name, but the date of death was the same. So I told him ‘this has got to be him.’ It was too coincidental to have the same name, birth date and death.”

The correct spelling of the name is Dawsey, there was no “o.”

Duhe printed out eight pages full of people with the name of Dawsey and started calling. He called asking each one if they knew who the grave belonged to and also asked them to talk with other family members to check. He got a response around mid-March.

“I had to go to my first responder refresher course, which was on a Monday and Tuesday and when I came back on Wednesday, someone told me a guy had called,” Duhe said.

“He said that the man on the stone was his great, great grandfather. That’s how I found out that he was buried in Picayune, Miss.”

Duhe said the family had no idea why the gravestone was found on the side of the road. Many speculate because it was spelled wrong, the marker was thrown away and just happened to fall off a garbage truck.

After all he went through, Duhe said he was relieved to know the gravestone was not connected to any crime.

“The family said they don’t want the gravestone, so we still have it; it’s next to my desk,” he said. “I have a couple of ideas as to what I plan to do with it, but I’m not going to tell anyone yet.”

The St. John Business Association recently recognized Duhe as Deputy of the Month for his dedication and investigative work, and also years of service.

Tregre said he was proud of Duhe for putting in all the work to find the owner.

“I felt good because no crime was committed and I felt good for (Duhe) because that was his first really completed investigative case,” Tregre said.

“He was excited and I was excited for him. He wasn’t searching for the family full time. He was doing it between getting paper work together on other cases to be purged. He is very detailed and gives 150 percent.”