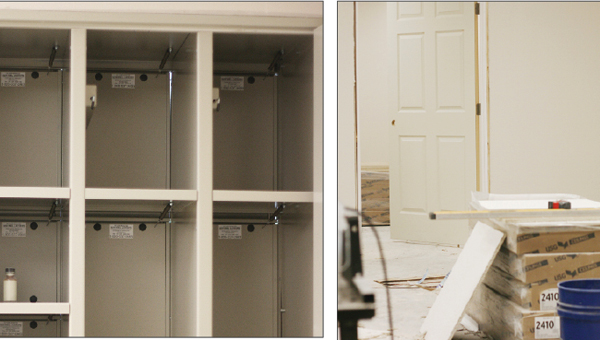 The new safe, left, acts as a temporary place for evidence storage until processing. Renovations to CSI, right, began two months ago and should be completed this month.

LAPLACE — More office space, a more secure place to process and hold crime vehicles and a new evidence safe are some of the features authorities will enjoy after renovations to the St. John the Baptist Parish Crime Scene Investigation department is complete.

“The office space that we have now, before we moved in, it was the room where we processed high crime vehicles,” Tregre said. “Those are crimes committed in a vehicle. The room already had air conditioning to preserve the DNA. We are working on a new office area now. There is going to be a door between the new and the old.”

Once the desks are moved out of the old room, it will be transformed back into an area to process high crime vehicles.

Branching off from the new office will be Tregre’s office, where an evidence safe has been installed.

“When the road units pick up evidence, they package it and right now they drop it in a safe,” Tregre said. “With the new safe on the back side, it looks like high school lockers. Once the evidence deputy puts the evidence in a locker and closes it, it can’t be opened unless Lt. (Jim) Brouwer comes in and opens it from the other side. No one is going to have access to this room (Tregre’s office) except me and Lt. Brouwer. It takes one person off the chain of custody.”

The new safe acts as a temporary place for evidence storage until processing.

“The safe will be videoed 24 hours a day for security reasons,” Tregre said.

“My office and the front office will be monitored by the alarm company also 24 hours a day.”

Fleet Commander Lt. Eugene Weinert said renovations to CSI began two months ago, and he is hoping for completion this month.

“I’m not sure if the furniture will be done, but the job will be completed,” he said.

“These renovations should have been done a long, long time ago. We had a lot of wasted space here, and now we are making use of it.”

The CSI department is located in the headquarters building next to the Lt. Sherman Walker Correctional Facility in LaPlace.

Weinert said its thanks to Sheriff Mike Tregre that the renovations are finally being done.

“(Sheriff Mike Tregre) is trying to push us into the 21st century, he said.

“We’ve always been in the back; we’ve been behind. Now, it’s time for us to move forward. Also, we are using inmate labor to build the office, which saves us a lot of money.”