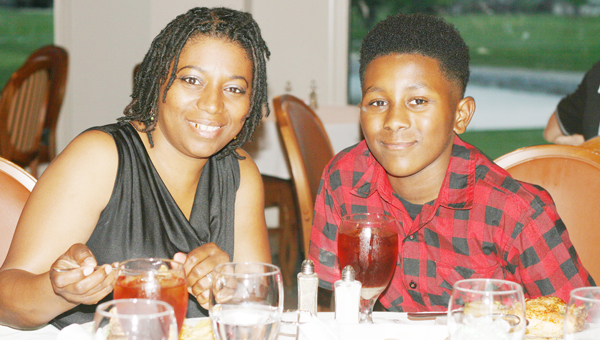 LAPLACE — Shazell Johnson-Christie said it would be two years this week that her son, Calvin “Lil Cal” Edman III, was killed.

“Calvin was a character,” she said. “He was comical, he could dance and he could draw. He liked to make people laugh and he was well known. He liked to put a smile on people’s faces.”

Johnson-Christie represented one of 17 families that gathered last week for the inaugural Victims Acknowledgement Ceremony hosted by the St. John the Baptist District Attorney’s Office.

District Attorney Bridget A. Dinvaut said the event was in honor of National Crime Victims Rights Week. Dinvaut, who also lost a loved one to a violent crime, wanted local families to know her office was there for them, they aren’t alone and their loved ones will never be forgotten.

Family members heard speeches and were given dinner, cake and a special gift from the District Attorney. There was also a board of hearts with the names of those that were lost.

Johnson-Christie said she thought the event was a thoughtful gesture.

“It was unexpected,” she said. “Honestly, I didn’t know what to expect. We actually moved to Baton Rouge and we came down here for this.”

As a mother, Johnson-Christie said losing a son in such tragic manner can be tough.

“Calvin was my oldest son, he was 17 when it happened,” she said. “I’ve been dealing with it. God, the most high, has given me the strength to go on. I have my days when I smile, and I have my days where I share my testimony.”

Johnson-Christie said she has met other mothers that have lost children, adding no one knows how it feels except another mother. Even though her son was killed, that doesn’t mean Calvin hasn’t continued to help others.

“Calvin was a donor; he has helped four people live brand new lives,” Johnson-Christie said. “One of the young men was only 27 years old, and he received Calvin’s kidney and pancreas. Now he has a whole new life, he just had a baby in December. That puts a smile on my face.”

One of the last homicides in St. John was that of Alan Burl, 37, of LaPlace. Alan was last seen Oct. 29, and authorities began their investigation Nov. 2 when his sister alerted them that no one had heard from Alan in days. Alan’s body was discovered Nov. 12  in a wooded area of Ruddock.

Akeem Burl, a first cousin of Alan, said he and the rest of his family were distraught when they heard the news.

“It was horrible; I’ve never felt that type of pain before,” Akeem said. “For him to be missing for so many days and we were wondering where he was and what was being done to him. That pain of not knowing hurt my family and I so much. Then for him to be murdered the way that he was. We’re still dealing with it.”

Akeem, also a guest speaker at the Victim’s Acknowledgement Ceremony, said it was hard to speak at the event.

“Like I said it’s one thing to die, but it’s another thing to be murdered,” he said. “Some of these people lost sons or brothers. It hurts, and I feel their pain, cope with them and stand with them.”

Akeem encourages all families that have lost a loved one to keep fighting, stay motivated and stay prayerful that all things will work out.