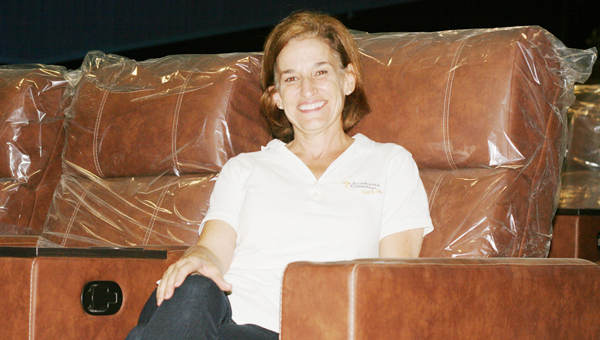 Cathy Collins, co-owner of Acadiana Cinemas in LaPlace, said the local theater is opening its doors for business April 29.

Doug and Cathy Collins, owners of Acadiana Cinemas in the Riverlands Shopping Center on Airline Highway, said their LaPlace movie theater is opening its doors April 29.

Cathy Collins said the decking for the seating is in place.

“We’ve installed all new chairs,” she said. “In one auditorium, the one that was three that we combined into one has a total of 90 reclining lounge chairs. We have projector that is going to be installed (this week).”

According to Cathy, all of the auditoriums are complete expect for carpet and handrails, which will be installed before opening night.

“Our big feature presentation will come May 6 when we show Captain America,” Cathy said. “We are very excited to be opening in time to see that. It’s the beginning of the big summer hits. We’re expecting a big crowd. We can’t wait to be able to show it in our new theater.”

Cathy said movies would play throughout the week, having shows at 2, 4, 7 and 9 p.m. with new movies every Friday. Cathy said a lot of residents have been asking about ticket prices.

The theaters will operate with approximately 15 local employees

“We have a manager, three assistant managers and the rest of the staff,” Cathy said. “We’re very excited about our manager, he is a LaPlace resident. He was the assistant manager of the theater years ago when it first opened. He has a lot of history with the theater, his favorite history is this is where he met his wife.”

Doug Collins said tickets should go on sale Monday or Tuesday on the theater website — acadianacinemas.com.

“We’re getting a little bit more feedback from the public than before,” he said. “There seems to be more interest in it. I think people are coming to understand this is going to be different than what it was before. I think we’re seeing a little more excitement, which is good. It reassures us that we are doing the right thing.”