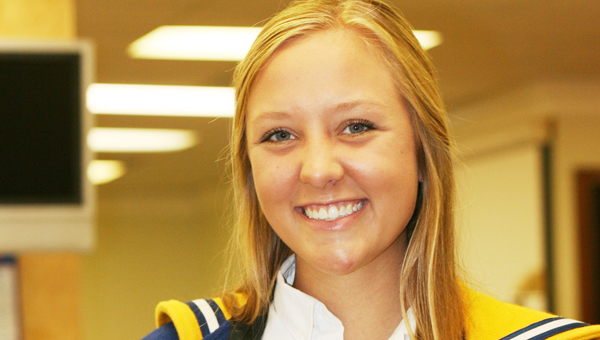 Ashley St. Martin, a senior at St. Charles Catholic, recently received a letter from State Rep. Clay Schexnayder telling her she was awarded a college scholarship to Tulane University.

Her time at St. Charles Catholic has been great, but Ashley St. Martin is ready for the next challenge.

St. Martin, a senior, is ready to start the next chapter of her life at Tulane University in New Orleans.

“I’m a little undecided on my exact major,” St. Martin said. “I picked Tulane because it’s a great school. It’s one of the best schools in the state. I’ll probably study biological sciences and possibly go to medical school after college.”

Along with getting accepted into her dream school, St. Martin also received more good news this month when she found out she received a legislative scholarship, which came from State Rep. Clay Schexnayder, R-Gonzales.

The scholarship will pay for St. Martin’s tuition.

“The way the scholarship works is that you first have to apply to Tulane and get accepted,” she said. “Then if you meet the requirements for the legislative scholarship, they email you, then you have to apply for that separately. You sign up on Tulane’s website then send in all your records to the state legislature. When I found out I got it, it was really exciting.”

Even though she is excited for next year, St. Martin isn’t forgetting about her time at St. Charles Catholic.

St. Martin has played softball and volleyball for four years, lettering two years in each sport.

“I’ve played softball since I was 4 years old,” she said. “My dad didn’t really force me to do it, but he had a rule that we had to play a sport until we were at least 10. He felt that when you’re younger, you don’t really know if you like the sport or not yet. Once I got to the age of 10 and I had to decide what I wanted to do, I started pitching and really started to love the sport. It’s been a really great experience.”

St. Martin is active with Student Council, where she is acting senior class representative, and is also member of the Beta Club, National Honor Society, and treasurer for Mu Alpha Theta.

“Beta Club and National Honor Society are both great ways to get involved in service projects,” St. Martin said. “I’ve always liked helping people. I really like caring for people. I just want to share my talents and help people as much as I can.”

She was surprised to receive the honor because she wasn’t keeping track of her hours in the first place.

To keep and share her faith, St. Martin is part of the Retreat Team, Fellowship of Christian Athletes and serves as an Extraordinary Minister of Holy Communion.

“Retreat team and FCA have been great ways for me to grow stronger in my faith through my years in high school,” she said. “It’s was also a way to grow stronger with my peers at the same time. For retreat team, I enjoy doing the skits because they’re funny and they make all of the younger kids laugh. I feel the skits make faith more relatable to them.”

Being an Extraordinary Minister of Holy Communion allows St. Martin to give Communion during school masses.

“They have to go through a process with the teachers checking the students, checking their spirituality and behavior at school,” she said.

Millet said approximately 10 to 15 seniors are chosen each year.

St. Martin enjoys giving communion to her peers: “It’s a way for me to share God with other people.”