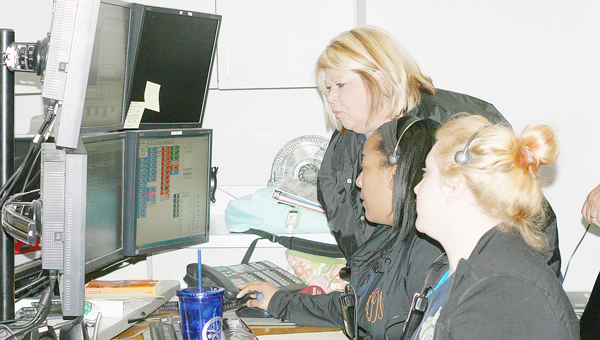 Betsy Shinogle, far back, looks at the computer monitor as Kristen Dunn and Misty Harlow look on Wednesday morning at the 911 communicators department headquarters. Shingole, the new 911 assistant commander for St. John, has been with the department for 10 years. (Raquel Derganz Baker/L’OBSERVATEUR)

LAPLACE — For the past 10 years she has dedicated her life to helping residents by sending the assistance needed in a variety of traumatic situations.

Betsy Shinogle has moved up the ranks in the 911 communications department,  having recently been promoted to 911 assistant commander for the St. John the Baptist Parish Sheriff’s Office.

With her new position, Shinogle is in charge of 15 employees.

“911 dispatchers are often the unsung heroes of the emergency response team,” Shinogle said. “They gather information from callers and dispatch appropriate first responders to the scene.”

Shinogle’s story and the work of her team are being highlighted in honor of National Public Safety Telecommunicators Week, which is celebrated April 10-16 in St. John the Baptist Parish and across the nation.

Just because Shinogle is the 911 assistant commander, that doesn’t mean she doesn’t answer calls.

“When someone needs to take a break or if someone is at lunch, I’ll go and get on a console,” Shinogle said. “You always want to continue no matter what your position is to keep up your training. You never know when an emergency will come in and we get bombarded with a bunch of calls and we have five consoles and four people.”

Shinogle has been part of a few unusual calls, such as callers under the influence of something, many in distress and those who just need to talk.

Regular callers are also part of the job.

“We have one lady, bless her heart, she has an invisible boyfriend,” Shinogle said. “She’s always thinking that he is there, either in the house or trying to climb in the widow. Even though basically we know she has mental problems, we have to react as if it’s really happening. We have another man who always calls us because he has a fear of sirens. Every time he hears a siren, he thinks someone’s coming after him. After we talk to him and calm him down, he’s OK.”

Shinogle said there have also been some happy calls.

She was on the phone with Acadian Ambulance Service when one of the deputies arrived on the scene and had to deliver a baby.

“I heard the girl, then I heard the baby and thought ‘Oh this is so sweet. We delivered a baby,’” Shinogle said. “Things like that always make you joyful. I always remember the good calls. They stick in your head.”

Deputy Faron “Slim” Duhe has worked with Shinogle for years. He was her supervisor when she started with the department, then later worked for her when she became his supervisor.

“Betsy (Shinogle) is a very helpful and knowledgeable person,” Duhe said. “When she came on my shift originally, I always looked at her as being an operator for a big city sheriff’s office versus a rural sheriff’s office like we are. I found that she brought a lot of stuff to our attention that we weren’t aware of because she was coming in for a big department.”

One thing that makes Shinogle special in Duhe’s mind is her smile.

“We became like brother and sister,” he said. “She is always smiling, I don’t ever see her frown.”

As her longtime friend made the comment, Shinogle had a huge smile on her face.

“I always have a saying when I leave for the day,” she said.

“I accomplished something today if my deputies got home safe, I made the citizens happy and I didn’t have any complaints. If that happened I know I can go to sleep peacefully.”

“A lot of people think 911 operators just answer the phone and say ‘911 what’s your emergency?’ but that’s not all they do,” Shingole said. “They are multitasking. You don’t want to be around here when a disaster hits. You have to want to do this job.”