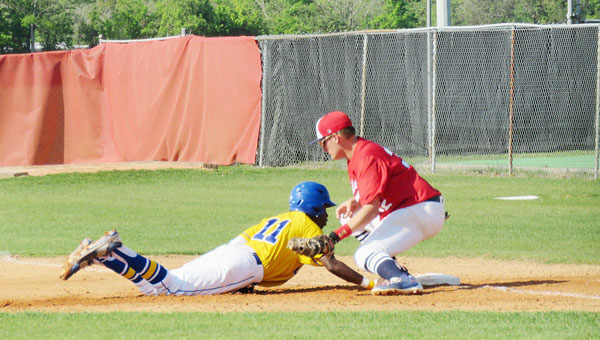 St. Charles Catholic lead-off batter Lloyd Nash dives back to first base under the tag of Riverside’s Drake Perret during Tuesday’s baseball game. Nash had two hits and scored the winning run in the Comets’ 1-0 win Thursday. (Lori Lyons/L’OBSERVATEUR)

LAPLACE — This week in baseball, Riverside Academy finally got the proverbial monkey off its back and St. Charles Catholic showed how to recover.

Riverside Academy pitcher Mason Vicknair pitched a complete game allowing six hits, walking three and striking out 18 as the Rebels took a 7-6 win Tuesday. It was RA’s first win over SCC since 2008.

The Rebels, who had not beaten their cross-town rival, St. Charles, since 2008, ended that streak Tuesday with a 7-6 victory at home in Reserve. They got it done with strong pitching and clutch hitting — plus four home runs.

The Comets turned the tables on the Rebels Thursday, using small ball and strong pitching to take a 1-0 victory.

That evened the series at 1-1 and created a 3-way tie for first place along with Newman.

Both games drew overflow crowds to the tiny River Parishes campuses, but Thursday’s crowd probably was bigger. Fans lined all the fences and some watched from the visitors’ football stands. Even fans at the adjacent softball game were facing the wrong way at times.

Tuesday was Riverside’s day. Jared Hymel hit a solo home run in the first inning, and Connor Poche hit a 3-run shot in the second.

After St. Charles scored two runs in the third, Jordan Loving’s 3-run home run in the bottom of the seventh inning tied the game at 6 and sent the game into extra innings.

Then, with two out in the eighth, catcher Brandon Morris hit a walk-off solo shot to start the Riverside celebration.

“It’s a big win,” Riverside coach Frank Cazeaux said. “The kids didn’t give up. They could have easily folded up the tents after the first inning.”

The Rebels let St. Charles take a 4-0 lead in the first inning with the help of two Riverside errors and a 3-run home run by Brady Newman.

After that; however, starting pitcher Mason Vicknair settled down. He went the distance, allowing six hits, walking three and striking out 18.

Brennan Gilberti, who took the loss for Riverside Tuesday, came back with a vengeance on Thursday, holding the Rebels to three hits and striking out six.

He walked one and hit one batter. Tyler Gauthier singled in the first and doubled in the second.

Morris doubled in the second. Loving reached on an error.

“Everything was working,” Gilberti said. “Nothing had been working all year, but my coach and I really worked hard on my pitches and everything came together.”

“He did the extra work in the bullpen and got the job done.”

Loving did his best to hold off the Comets. He gave up five hits, walked one and struck out six.

After five scoreless innings, during which the Comets managed only four base-runners, Stein knew he would have to make something happen.

Lloyd Nash led off the top of the seventh with his second single of the day. Dane Authement then put down the perfect bunt down the first base line and beat the throw from Loving.

Zack Weber bunted to Loving again, but this time there was no one at first to throw to. With the bases loaded, Justin Ory hit a sacrifice fly to center field, allowing Nash to score the game’s only run.

Stein said his team was determined to come back.

“They didn’t promise me they’d win, they promised me they would compete,” Stein said.

“I think we went there Tuesday thinking there was no way we could lose and you see what happened. But that’s a good thing. We needed to be humbled.”