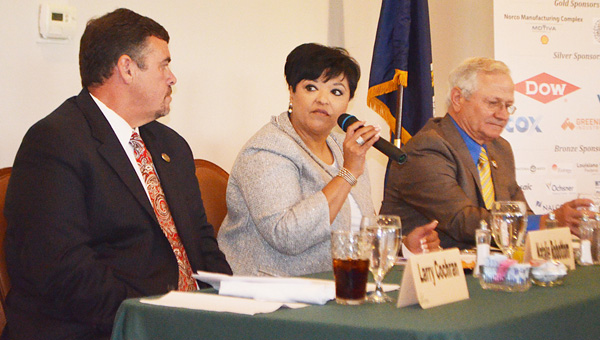 LAPLACE —St. John the Baptist Parish residents are all too familiar with flooding.

After dealing with past traumas that resulted from flood damage and thinking about the future, Parish President Natalie Robottom said levee protection is much needed.

Robottom, along with the help from a U.S. Congressman, is trying to set things in monition.

“The West Bank Project will start in Montz and go into St. Charles Parish,” Robottom said. “The goal of the levee is to be an 18-mile levee that goes through St. John with pumping stations and ties into St. James Parish. We’ve been witness to Hurricane Katrina, with absolutely no direct impact on our area, strike and we still received flooding on Highway 51. Those are things that continue to impact us because of the tidal influx.”

Robottom addressed the issue Wednesday morning in front of members of the business community during the River Region Chamber of Commerce’s Parish President’s Forum.

Robottom said the West Bank Hurricane Protection Levee is already in the state’s master plan for 2017.

“The levee project, itself, is already eligible for state as well as federal funding once it’s allocated. Congressman Graves knows what is needed here. He was here for Hurricane Isaac and he really understands what our needs are.”

When talking about levee protection, Robottom said, you have to consider property acquisition, mitigation and dealing with pipeline crossings.

“All these are things that can be started before we get the $718 million,” she said.

After a devastating tornado tore through LaPlace Feb. 23, Robottom said there are many residents still trying to recover.

During the forum Robottom spoke about the damage the parish sustained.

“We are still waiting and appealing the federal declaration that will help us by providing funding to provide assistance to our residents. Also, to help us pay for the public services that we are providing, such as debris removal and paying for our employees.”

Robottom said many don’t realize there is a threshold that must be reached in order for the parish to get federal assistance, which has not yet been obtained.

“We talk about the taxes and the burden and the instability moving forward, but when things like this happen early in the budget year, those extra expenditures are coming out of the dollars that we planned for something else,” she said. “So at this point we are very fortunate. I’m very fortune to have neighboring parish presidents who sent help to us immediately.”

The streets of St. John, according to Robottom, couldn’t have been cleared of the trees, limbs and debris without help from other parishes.

Even though it’s been more than a month since the tornado, Robottom said recovery isn’t over.

“We need assistance from the Federal government,” she said. “We are going to continue to lobby for that.”

Robottom also touched on other topics:

• St. John will be getting a new East Bank Government Complex. The facility will be located on the front lawn of the Percy Herbert building in LaPlace. Parish officials say the $9.5 million facility will be a one-stop location. At this point residents need go to several locations for Parish government services.

• A West Bank senior center is being built, which is a $600,000 investment. Renovations to the West Bank Library are also expected and will cost $800,000.

• To help improve the quality of life for St. John residents the parish recently made a $2.5 million investment in recreations.