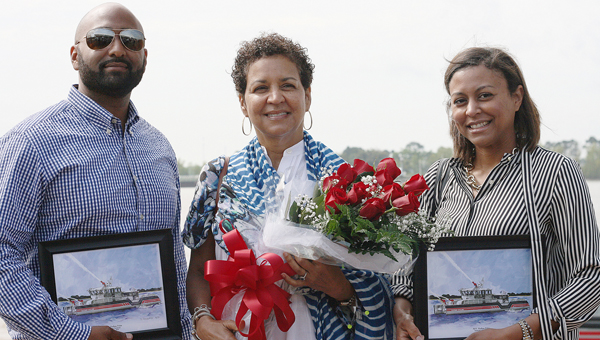 Nathan Folse Jr., from left, stands with mother Joni and sister Melissa Folse Oubre at the dedication ceremony Wednesday morning at the Port of South Louisiana. Family members received paintings of the M/V Nathan Folse along with flowers. Folse said the new fire boat named after his father will leave a lasting legacy of his father’s service to the Port and local community. (Raquel Derganz Baker/L’OBSERVATEUR)

RESERVE — For Melissa Folse Oubre, it’s a bittersweet feeling having a sea vessel named after her late father, Nathan Folse.

The M/V Nathan Folse has a pumping capacity of 5,5000 gallons per minute and carries 3,000 gallons of firefighting foam.

“I’m just so excited and honored to have it named after my father,” Oubre said.

“I know he would have found this so amazing. I’m so thankful that the Port did this for him.”

Oubre, general counsel for the Port of South Louisiana, took her father’s position after he passed away in 2010.

Folse was with the Port from 2005 until his passing. With a smile on her face, Oubre said it was an honor to take her father’s position.

Family members, old friends and Port of South Louisiana administration and staff gathered Wednesday morning to honor Folse by naming the new fireboat in his honor.

The M/V Nathan Folse is the newest fireboat for the Port, spanning 75 feet long. The vessel has a pumping capacity of 5,500 gallons per minute and carries 3,000 gallons of firefighting foam using three remote control monitors.

The new fireboat is the fourth multi-mission vessel for the Port. Others include the John James Charles, Accardo and the PSL Responder.

Director of Port Operations Mitch Smith said the Nathan Folse, like the other fireboats, belongs to the Port.

“The new boat has more firefighting capability,” Smith said. “It has a more stable platform and additional equipment to enhance our security in the Port area.

“Fire boats assist in any dock fires, boat fires or anything that is within reach of the capabilities of the vessel.”

“There is live stream capability with the infrared camera,” Smith said. “It has color radar with NavNet capability, which is additional navigational equipment that assist in low visibility navigation. As for communication, it has the Interoperable System, which means we can communicate with other federal, state and local agencies.”

The vessel, which was made by Metal Shark Aluminum Boats in Jeanerette, was funded through the Port Security Federal Grant and cost $3.5 million.

Smith said the vessel took a year to complete.

“We are excited to put the new vessel into service,” Smith said. “Hopefully, it will remain in service for many years to come. This vessel impacts the surrounding community because it enhances the response capability for those responding to multi-mission posture that we have as far as search and rescue, pollution response, firefighting and Port security.”

Paul Aucoin, executive director for the Port, said it’s an honor to remember one of their Port family members by naming the vessel after him.

“I sat down and jotted down a few words that I thought describe Nathan Folse,” Aucoin said. “In my opinion, he was charismatic, gentle and genuine. It’s my hope that this vessel that we are christening and dedicating will serve as a real tribute to Nathan.”

Son Nathan Folse Jr. said it was after his father’s death that he and the rest of his family were told stories about Folse’s dedication and kindness towards others.

“My father wasn’t boisterous about the kind things he did on a daily basis to help people,” Folse said. “Some attributes my father exhibited were wisdom, loyalty, honesty, honor, selflessness and he was courageous. This memorial speaks louder than words.

“It’s a lasting legacy of his service to people.”

Folse said he and his family will be forever grateful for the naming gesture.