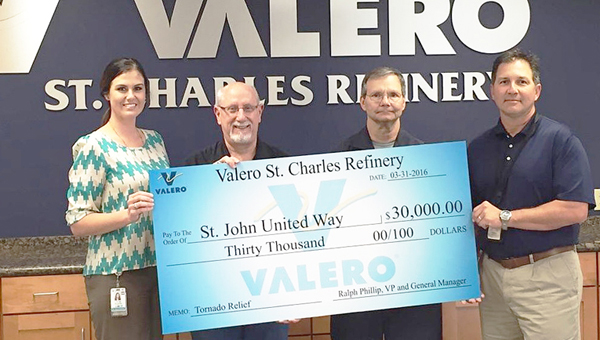 NORCO — FEMA’s decision not to declare St. John the Baptist Parish a disaster area following the devastating Feb. 23 tornado has been a major obstacle slowing tornado response in the area, recovery leaders said.

St. John United Way Executive Director John Olynick acknowledged recovery is seldom quick but is slowed because the federal support from FEMA that was available after Hurricane Isaac does not appear available for tornado victims this year.

“Recognizing that an estimated 100 homeowners whose homes were damaged did not have wind and hail damage insurance with their homeowners insurance is going to make the generous financial donations so far received stretched to the maximum,” Olynick said this week.

St. John United Way has raised more than $110,000 for short-term relief and long-term recovery, according to Olynick, and is working with the Long Term Recovery Group to assist those who need it most.

“The group is also in the process of accepting donations of re-building materials,” he said. “Skilled laborers and volunteers are highly needed to assist with rebuilding efforts, and interested volunteer groups should also call the hotline at 985-359-0460 to register to work.”

Large volumes of rebuilding and construction supplies are being accepted through the multi-agency LaPlace warehouse, located at 1929 W. Airline Highway.

“When we heard about the devastation of some of the residents in St. John the Baptist Parish, our neighboring parish, we had to step up and do what we could to help,” Valero St. Charles Refinery Vice President Ralph Phillip said.

“We know United Way will make the best determination on the best way to use the funds.”

“We will work with the coalition made up primarily of groups that supported the recovery from the hurricane that occurred in 2012 to try and meet as many unmet needs as possible with an emphasis on uninsured and underinsured homeowners,” Olynick said.

“In order to make the dollars donated from Valero, Marathon, Denka, Shell, Dupont and others go as far as possible, plans are to use volunteer help, both skilled and unskilled, to the extent possible.”

Groups and clubs wishing to help should contact the Volunteer Reception Center at 985-359-0460. Callers are asked to leave a message if they cannot reach a volunteer.
All donations will be allocated to volunteer and nonprofit organizations in the Long Term Recovery Group.

Recovery website stjohnrecovery.com has been activated to help recovery efforts.