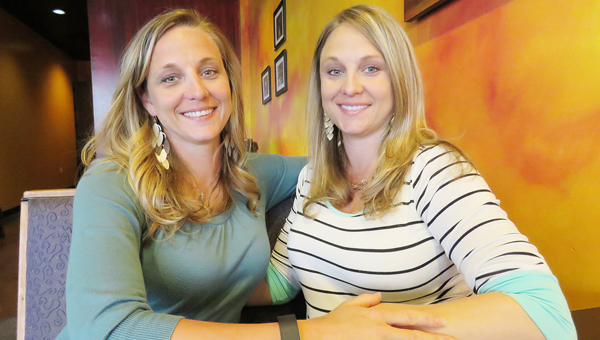 LAPLACE—Just about everyone in LaPlace knows them, the two blonde beauties who grew up before everyone’s eyes, who went from stellar high school basketball players to college players to carefree young women to wives and mothers and, now, teachers.

Erin, left, and Erica, right, will perform for the second time at the Sings and Strings Festival April 10 to benefit the Garyville Timbermill Museum. Both are self-taught singers and musicians.

You know them. You’ve seen them. You just may not have been able to tell which is which.

Together, they signed to play for Nicholls State University. Together, they transferred to William Carey College. Together they tried to live as “Catholic girls at a Baptist college in Mississippi.”

Then, Erica tore her ACL.

“She broke her knee and broke my heart,” Erin said. “I cried so much. I would drive to practice just boo-hoo’ing. It was the first time I ever played without her.”

That was Erin’s last season as a player, but Erica red-shirted for an extra year of eligibility. The following season, Erin became a graduate assistant and, in essence, Erica’s coach.

“You couldn’t coach me,” Erica said.

They returned to LaPlace with plans to live together some more — until Erin got married.

“She got married and we got divorced,” Erica said. “She went and ruined everything.”

Erica, meanwhile, sowed some oats — with the “Evil Twin” license plate to prove it.

“Everybody knew where I was and what I was doing,” she said.

She worked as a physical therapist for several years, then went in with a friend to buy a bar, Blondie’s. She ran the business, bartended, learned how to D.J., sang karaoke and had a good time.

Erin, on the other hand, settled down as wife and mother and returned to St. Charles Catholic as a teacher and basketball coach. She spent seven seasons as coach of the Lady Comets, having “the time of my life.”

“I loved every, single minute,” Erin said. “I loved coaching. Those were some of the best times of my life. I will coach again, somewhere. I dream about it.”

Then life got in the way. She and her husband divorced and she suddenly was a single mom with two kids.

“I just couldn’t do it all, and I will never not put my kids first,” Erin said.

Now Erin and Erica are neighbors, separated by only a block or two. Erica married three years ago to Jack Harris  — a Riverside grad — and they have one son with a player to be named later on the way in just a few weeks.

“I need something to think about while I’m in there,” she said.

Before then, Erin and Erica are set to perform — together, of course — at the Sings and Strings Jam Festival to benefit the Garyville Timbermill Museum.

“I won’t need a guitar strap,” said Erica, rubbing her baby bump. “I can just rest it right here.”

Don’t feel bad if you can’t tell them apart even then. Erin and Erica have spent their whole lives — well, except for the late stages of their pregnancies — fooling the world.

“We would switch places all the time,” Erica said.

“Then she went and spoiled all the fun,” Erin said.

They don’t even have to try. Erin recalled a time when the St. Charles Catholic basketball team was playing arch-rival Riverside one night when the Lady Rebels’ coach at the time yelled to her players, “Figure out which one you’re supposed to guard and guard her!”

“I dressed like Erin, I walked like Erin, I wore my hair like Erin,” Erica said. “The kids were looking at me like, something’s not right. Finally one of them said, ‘Coach? Did you wash your hair or something.’”