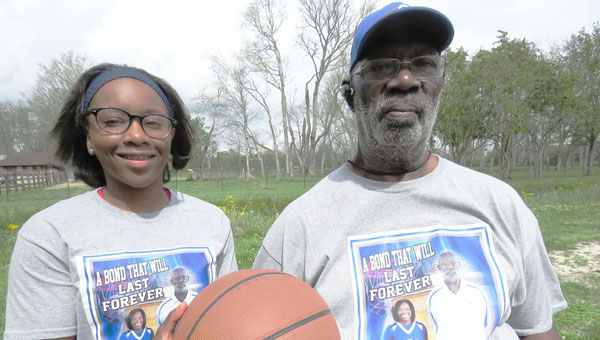 West St. John senior guard Maya Trench, left, is L’OBSERVATEUR’s All-Parish Player of the Year. Coach Lester Smith, right, is the Coach of the Year. Trench had special T-shirts made for the two of them, which she presented to Smith on Senior Night as a surprise. (Lori Lyons/L’OBSERVATEUR)

EDGARD — Before the season began, West St. John girls basketball coach Lester Smith hinted that this might be his last.

After all, he said, 46 years was long enough in coaching, including nearly 28 as the leader of the Lady Rams.

He has led his teams to more district championships than he can count, and trips to the playoffs the last seven seasons. That includes trips to the quarterfinals the last three years in a row, a state runner-up finish in 2013 and a semifinals appearance in 2012.

There have been lean years, he said, but his last five teams have gone 47-1 in district play.

This might have been a perfect time for Smith to hang up his whistle. This year’s team finished 20-8 overall and 8-0 in its first foray into Class 2A. Whether it’s his last year or not, Smith is the Girls Coach of the Year on the L’OBSERVATEUR ALL-St. John Parish Girls Basketball Team.

“I haven’t made up my mind yet,” Smith said of his retirement plan. “I don’t know if I’m ready or not.”

It isn’t often that a coach gets a player like the one he has had for the last five years in senior Maya Trench, one who not only set new scoring records, but also had a special T-shirt made for her coach and herself. “A Bond That Will Last Forever.” She gave it to him on Senior Night as a surprise.

“He treated me like I was his daughter,” Trench said. “He taught me that no matter what happens in life, you have to keep going.”

The diminutive guard (she’s 5-foot-5) led the parish in scoring, averaging 19.2 points and six assists. Next year she will be headed off to play for Xavier University.

Trench is the L’OBSERVATEUR’s Player of the Year.

The rest of St. John the Baptist Parish’s basketball teams reached great heights as well. East St. John finished as the District 6-5A runner-up with a record of 18-2, 10-2 and was the No. 29 seed in the Class 5A bracket.

A young player with solid skills, she averaged 16 points, 7.5 rebounds and 4.5 assists for the Lady Rebels.

An outstanding shooter, Hunter averaged 13.2 points for the Lady Rams this season.

A young leader on the court, Lipps averaged 12 points per game, five assists, five steals and three rebounds per game.

A young player with much potential, she averaged five points and seven rebounds per game for the Lady Comets.

She averaged 10 points per game, three assists, 1.3 steals and six rebounds for the Lady Wildcats.

A force under the basket, Nora averaged 12 points and 8.2 rebounds per game.

The leading scorer in the parish, Trench averaged 19.2 points, three steals and six assists. She has signed to play for Xavier University.

Player of the Year:

Coach of the Year: