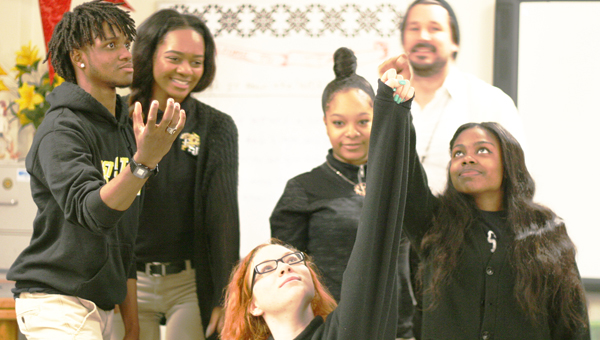 It was the first time the high school acting troop, made up of East St. John High School students, attended the rally. They walked away with plenty of awards.

Prejean, East St. John’s drama teacher, was glad his students were recognized for the months of hard work they put into “Lockdown” — Prejean picked the production over the summer.

The students participated in the Louisiana Literary Rally March 5 at Nicholls State University.

Schools were given 20 minutes for their performances, enough time for one performance or just several scenes.

As part of the production, schools were limited in the amount of props and sets they could use and had to provide their own sound and speakers.

“I feel like it was a great experience for the kids,” Prejean said. “Winning first place was a type of validation for them, showing their hard work paid off. Their faces light up and their confidence shot up. It was nice to see them succeed.”

“Lockdown” is about high school students from different clicks and backgrounds thrown into a classroom because of an intruder in the halls.

“It’s a character-based play,” Prejean said. “The students are dealing with themselves, personally, and also the anxiety of what is actually happening on the outside, forcing them to stay in the room. They have to deal with one another and they don’t have a choice. In the end, they have to learn to be human beings and the whole facade of high school is actually all bull because they are all human beings and they’re all scared and have worries.”

“You can have fun and enjoy yourself,” she said. “If you take it seriously, you can go far in it. I’m serious about it. I’m always a little nervous, but when it’s time to perform I just focus and all of the hard work I did is put into action.”

The actress said it was an awesome feeling to win first place, adding he thought other teams underestimated them.

“We won first place, and it showed us all of our hard work was worth it,” she said. “Rehearsing the play was fun, because I love the people I work with and was just awesome.”

Gerhart, also a sophomore, has been in the program the longest, starting when she was in kindergarten. As a child she was encouraged to join theater because of her energy.

“Being cast as Mary in Lockdown was a pretty difficult role for me to play,” she said. “I had to venture into some new things that I never had to do before. Like, my sexuality was a big deal in the production. I’ve never taken on a role like that, so it was kind of difficult, but it was fun.”

Gerhart said the students involved in the program are very serious in what they do, adding she wants people to know they aren’t a “rag tag team” of students.

Crockett, a senior who recently got a partial acting scholarship, said acting is a fun outlet and an adrenaline rush.

“You have to be vulnerable, you have to let things affect you and you have to affect other people,” he said. “That’s the fun part about acting.”

“Theater isn’t just for geeks,” he said. “Anyone can act and anyone can be an actor.”