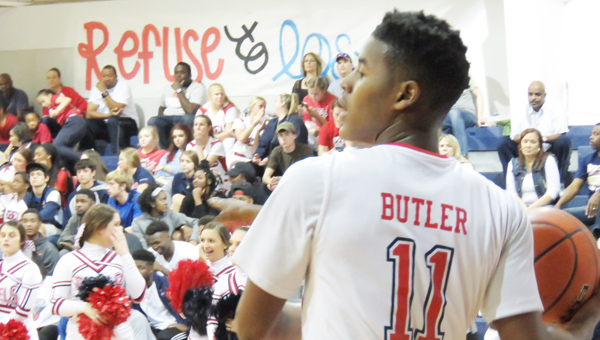 Riverside Academy’s Jared Butler looks for an open teammate to inbound the ball to during Tuesday’s playoff game against Lakeview. Butler finished with 13 points. (Lori Lyons/L’OBSERVATEUR)

RESERVE — The last two times Riverside and Lakeview met on a basketball court there was a state championship trophy on the line, not just a trip to the Class 2A quarterfinals.

Perhaps that’s what made Lakeview fight so hard.

The No. 15 seed Lakeview Gators, who have finished the last two years as Class 2A state runner-up to Riverside, gave the Rebels their best fight in three tries Tuesday night before finally succumbing 62-52.

Riverside (27-5), which has won three Class 2A state titles in a row, advanced to Friday night’s quarterfinal round against No. 7 seed Dunham (29-6).

Riverside defeated Dunham 81-48, a victory that sends the Rebels to the Boys Top 28 tournament next week in Lake Charles.

The Rebels had to work to get past the revenge-minded Gators, who aimed for the low post all night and usually got it with a pair of big men. Adrio Bailey, a 6-foot-7 junior small forward who has committed to Arkansas, led his team with 26 points and seven rebounds. Cameron Pottain, a 6-8 senior, scored 14 points and had eight rebounds. They combined for three dunks.

Riverside, meanwhile, did not have its best night, hitting only five 3-pointers, missing at least a dozen layups and going 17 of 27 at the free throw line.

“We seem to have a game like this every year in the playoffs,” Byrd said. “It’s a testament to this team, though, that we can have a game where we don’t play well and still win.”

It started off well with the Rebels forcing a flurry of early turnovers and Herb McGee hitting a pair of 3’s to take an early 13-6 lead. Then Lakeview got going, outscoring the Rebels 9-0 in the final 2:11 of the first quarter — including a half-court buzzer-beater by Michael Banks — to take a 15-13 lead.

A neck-and-neck second quarter left the Rebels hanging on to a 24-20 halftime lead. Riverside never was able to put the Gators away for good and never got more than 10 points ahead. That’s where the Rebels started the fourth quarter, leading 43-33. Over the final eight minutes, Lakeview cut the lead a few times. With 2:31 remaining, Riverside was holding on to a 51-48 lead.

That’s when the Rebels defense kicked in. A baseline turnover turned into a layup by Malik Crowfield. A few seconds later, Crowfield converted a steal. Garland Robertson scored on a pump fake to give the Rebels a 55-48 lead with 1:13 remaining. After that, Riverside held the Gators to one basket and a pair of free throws while hitting 7 of 11 at the line. McGee finished with 23 points, Crowfield with 16 and Jared Butler with 13.