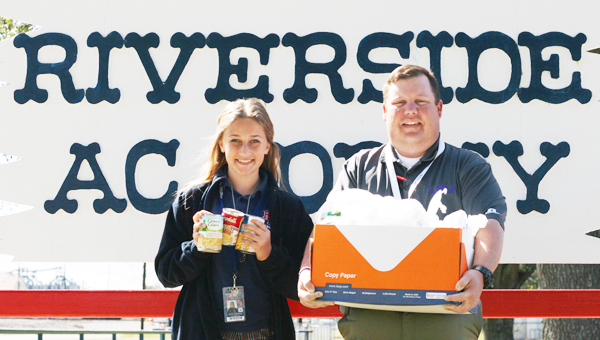 In 2016, Jenna Beber stands with Riverside Academy teacher Johnny Collins as they display the types of food recently donated to St. John Ministry of Care in LaPlace.

RESERVE – When Riverside Academy teacher Johnny Collins describes one of his students as “outstanding,” he’s referring to 13-year-old Jenna Beber of Reserve.

The eighth grade Louisiana history teacher said Jenna thanks him for teaching her every day and also works to feed hungry residents in St. John the Baptist Parish.

Jenna has been collecting canned food for the past few years in yearly collection drives to give to those in need. Collins decided to lend a helping hand this year.

“This is the first time where I’ve ever been involved in a situation where it was a single student’s idea and not an organization,” Collins said. “It’s nice to see that type of young person with that kind of heart. It seems more sincere, because this was one person’s idea, one’s thoughts and one person’s initial action to put this into motion.”

Collins said he challenged his students to donate a certain amount of cans to Jenna’s cause and in return each student would receive extra credit in his class.

“About a week before the drive ended, I offered, on a whim, the entire eighth grade class an opportunity for bonus points if they individually turned in cans,” Collins said. “Then on top of that, I gave them a class-wide goal. If they reached that goal, everyone in the class would get additional points.”

Unfortunately, the eighth grade class wasn’t able to reach its goal, but Collins is still proud of the students who helped Jenna feed the people of the community.

Jenna started collecting canned food in the third grade when she was inspired by a campaign on the Disney channel called Helping Hands, as well as hearing people speak at her church about helping others.

“I was really inspired, because all of my favorite people were up there doing helpful things, so I wanted to do it too,” Jenna said. “The cans I collect go to the St. John Ministry of Care in LaPlace. The first year we did it, we were looking for some place local. We went to talk to them, and they seemed happy to take all of the cans.”

The first time Jenna brought cans to the Ministry of Care, she was able to donate 300. This year, the eighth grader said she was able to give 1,000 cans, which weighed approximately 600 pounds.

“When I started, I really thought it was going to be a one year thing, but then in fourth grade I wanted to do it again and I got like 400 cans,” she said. “It just kept building up. I’m excited though. I didn’t think I would get this far.”

Jenna said she had the help of friends and family this year, along with students from Riverside Academy and Lake Pontchartrain Elementary.

“I’m very thankful because if it wasn’t for the two schools, we wouldn’t have barely anything,” Jenna said. “We relied on the schools, family and friends to collect everything. We wouldn’t have even gotten half without the schools’ help.”

Jenna collects nonperishable items such as Ramen noodles, rice, vegetables, corn or “anything in a can.”

“This year, the food bank gave us a list,” she said. “They normally get a lot of canned vegetables, so they were really looking for beans and rice, because that can feed a family and they are very filling. The 10-pound pack of rice is very helpful.”

Her favorite part was delivering the items to the Ministry of Care.

“The ladies there have the happiest looks on their faces and they are always so surprised when we open our car,” she said. “They’re expecting 100 or 200 cans, even when we told them that we have a lot. They were never expecting 1,000 cans.”

The 13-year-old said she plans to continue to collect cans to help those in the community that need food.

“I’m sure the food means a good bit to them,” Jenna said. “The food that we give we now is going to good use. It’s really cool to see them put the food that we donated on the shelves. As long as I can, I’ll keep collecting cans. I hope it keeps growing like it has over the past few years.”