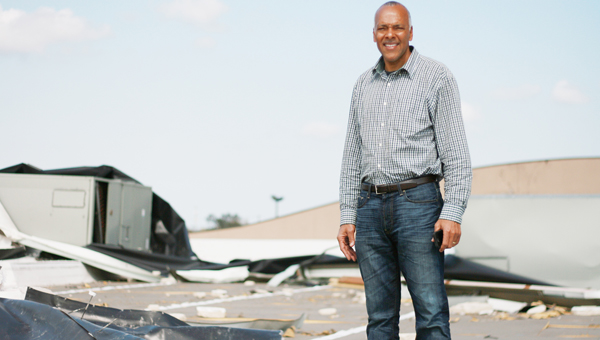 In the 20 plus years New Wine Christian Fellowship has been in LaPlace, Pastor Neil Bernard said the building has not sustained as much damage as it did as the result of a tornado that tore through St. John the Baptist Parish Feb. 23.

“We’ve had severe hurricanes that have hit our area like Hurricane Katrina, Gustav and Isaac, but it was mainly minor,” Bernard said. “This devastation is probably the worst we’ve had from a storm.”

New Wine Christian Fellowship has been an active part of disaster relief for people impacted by hurricanes in the past. The shoe is now on the other foot as the church is the one in need of community help.

“After Katrina, we sheltered about 800 people from New Orleans here and provided shelter for about three months,” Bernard said. “Then we had distribution and relief going on. We did the same after Gustav and Isaac. I’m the chairman of the long-term recovery group, and we’ve been involved with helping our community rebuild after storms. Now we’re in the place where we need help with rebuilding. It’s a different role.”

Bernard said the church has been consistently getting calls from those asking, “what can we do to help?”

It has been refreshing, because, it’s in times of crisis when a community’s strength is reveal, Bernard said.

“We’ve had all kinds of volunteers that came and gave us a hand with gutting and removing debris, and that was really refreshing because it was a little overwhelming at first,” he said Monday morning. “We’ve been averaging 50 to 80 volunteers a day. As a result of that we were able to totally gut the church and remove the debris from around the building. The gym is the last place remaining where we still have a lot of debris to remove. Overall, we’ve done pretty well.”

New Wine Christian Fellowship sustained water damage from the roof being peeled away by wind allowing rain to come in, a wall on the backside of the building was torn down and the gym where midnight basketball games and summer camp are held was totally destroyed.

“We had lots of people who came out shortly after the tornado hit, who rolled up their sleeves and started trying to salvage what we could,” Bernard said. “We were able to save some stuff in our church from being destroyed by rain water. We were grateful for that.”

In the back of the building sits what remains of a playground for children who attend the before- and afterschool care at the church.

Bernard said if parish schools had not cancelled classes the day of the tornado, there would have been children in the gym when the tornado hit.

Patricia Bernard, who helps with afterschool care, said she was in a state of disbelief when she saw the building’s damage.

“It was a lot do deal with,” she said. “The tornado did a lot of damage. All of our children’s church areas are gone. I walked into the church after the storm and the ceiling was falling in.”

Patricia said she had a knock on her door from her sister-in-law saying the church roof was gone and she had to see for herself.

“The aftercare building didn’t sustain too much damage, but the carpet did get wet so they had to pull up all of that,” Patricia said. “As far as the building, it was OK, but all of the playground stuff was moved. It’s sad because the kids like to play on the play set. I have no idea when we will get everything back up for the kids.”

Even though the church is damaged, Patricia is not giving up hope.

“We’ve had a lot of support from the community,” she said. “It’s a good feeling knowing that people are pulling together.”