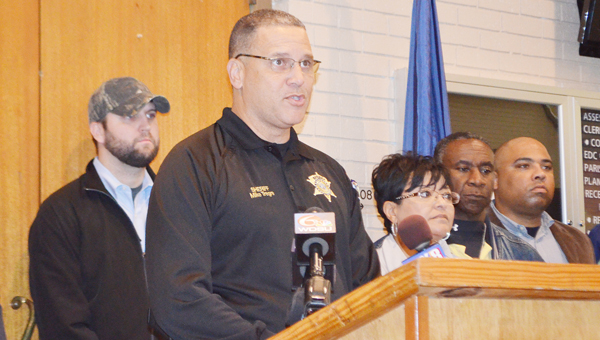 LAPLACE — Sheriff Mike Tregre said reports of looting and stealing are dramatically decreased in the days following this week’s devastating tornado as compared to Hurricane Isaac in 2012.

“We were getting calls of looting almost every day, multiple times a day, after Isaac,” Tregre said Friday morning.

“Now, we just have one case. There was (also an) incident where someone caught a guy in his garage, but the guy took off running. He didn’t have a chance to take anything.”

During a press conference Wednesday morning, Tregre said St. John the Baptist Parish Sheriff’s Office deputies would have a “very, very strong presence in marked and unmarked units” to deter looting and theft.

“For those who would come out here and try to steal or loot, hopefully you hear this: It may not be the Sheriff’s Office you have to fear,” Tregre said Wednesday. “The residents will protect themselves and their property. It may turn out that you may be the one who needs 911 services.”

Local authorities confirmed one report of a burglary in the 2200 block of Cambridge Drive. No suspects have been identified, and no arrests have been made.

The Sheriff’s Office received the call at 9 a.m. Wednesday and discovered electronics, jewelry and a gun were stolen.

Tregre said a burglary report came in Friday morning, and deputies are investigating if it happened in the tornado-impacted Cambridge community.

Authorities are also aware of a social media video showing children picking chips off the ground after a truck overturned at Win-Dixie.

The incident was not reported.

“There was a truck that overturned due to the wind Tuesday,” Tregre said. “There is a guy, who had his cell phone, and he recorded these little kids picking up potato chips off the ground. I put a little reward out there for anyone who can direct me to this gentleman, and I put a number out there so people can call me. So far, I haven’t gotten anything yet.”

Tregre said the Sheriff’s Office is continuing to monitor for thefts and looting this weekend.

“Even if power is restored, I still feel there is a duty, obligation and a responsibility for us to do our best to try and protect valuables or assets in these destroyed homes,” he said. “Hopefully, by the time the weekend is over, most of the residents will have gone into the homes and salvaged whatever valuables or necessities they need to retrieve.”