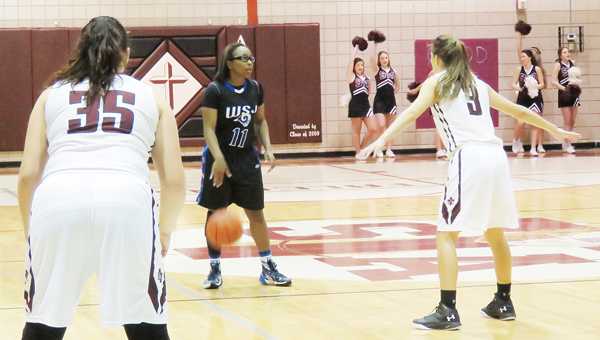 HAMMOND — One way or another, West St. John’s season was going to end in Hammond. It just ended a little sooner than the Lady Rams had hoped.

No. 2 seed St. Thomas Aquinas did what few other teams have managed to do this season — shut down senior point guard Maya Trench to take a 59-29 victory and knock the No. 7 seed Rams from the Class 2A playoffs Thursday.

Trench was held to seven points with only one 3-point field goal on the night. Jaquana Hunter was the only Rams player to finish in double figures with 13 points.

It was the Falcons’ defense that won the game. White said he knew they had to shut down Trench.

“I knew they had an exceptionally good point guard,” White said. “We had to get her out of a rhythm, and the only way to do that was go in a zone to really key on her. With that said, now there’s more lanes to crash and go, but we did a great job of boxing out. This was our best game as far as blocking out, and our offense really shot well.”

The same could not be said of the Rams, who were off their game all night, missing from the field, inside, outside and even put-backs. St. Thomas Aquinas jumped to a quick 5-4 lead in the first three minutes, then held West St. John scoreless until the 2:03 mark of the first quarter. By then the Falcons led 12-6 with Hunter doing all the scoring and Trench scoreless. She would not get her first basket until 4:28 remained in the half.  Her only 3-pointer came with four seconds remaining in the half to cut St. Thomas Aquinas lead to 29-19.

“We just couldn’t hit shots,” Rams coach Lester Smith said. “They had a good game plan. We just didn’t execute. Offensive-wise, defensive-wise, we just didn’t play well. They’re a good team. We knew they were going to box Maya in. We couldn’t get the ball to her. Then it got a little out of hand.”

Understandably, there were tears on the faces of the Rams as they emerged from their post-game locker room — but not on Trench’s and not on Smith’s. Trench has signed to play college basketball for Xavier University in New Orleans.

“I told her, ‘Don’t let this one game get to you. You had five great years,’” Smith said. “She’s going to be a great player on the next level. She played her heart out. We had a great season. This group of seniors lost one district game in five years. To win 20 ball games and lose eight is not too bad.”

Smith was not ready to say if this was his last game after 46 years as coach of the Rams.