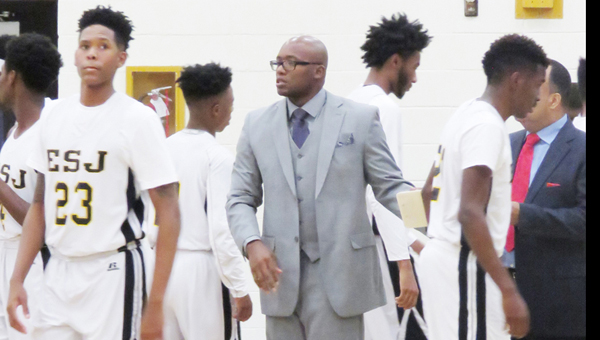 Wildcats senior forward Jordan Perry, No. 23; head coach Yussef Jasmine, center, and the rest of the East St. John basketball team break a huddle during the season. There is a still a lot more coaching and playing left for the Wildcats, who enter the Class 5A playoffs as the No. 14 seed and take on No. 19 Bonnabel in Friday’s bi-district round.

RESERVE — In sports and many other things, it’s not how you start it’s how you finish.

Back in the fall, East St. John and Riverside Academy started their seasons with disappointing losses — East St. John to East Ascension, 89-76; Riverside to West Jefferson, 58-49 — but when the boys basketball playoff pairings were announced on Monday, both teams still had hopes of winning a state championship.

Riverside Academy, the three-time defending state champion and winner of five of the last six Class 2A titles, earned the No. 2 seed and will host No. 31 Catholic of New Iberia at 7 p.m. Friday.

The semifinals and finals will be played the week of March 7 at Burton Coliseum in Lake Charles.

East St. John (19-9) has been to the State Tournament only once, losing to Thibodaux 86-70 in the 2005 semifinals. The Wildcats reached the quarterfinals in 2006, losing to Hahnville, 71-69. No East St. John team has gotten past the regionals since then.

Coach Yussef Jasmine says this is a different Wildcats team, though, one that can adapt and win in many ways.

Friday night the Wildcats won in one of the most improbable ways, with a half-court buzzer-beater by Raekwon McKnight to take a 63-60 victory on the road at Central Lafourche.

“I think that’s the most amazing moment I’ve ever had as a coach,” Jasmine said. “It was just amazing. The Central Lafourche people just froze, and our fans were jumping up and down. Our kids forgot what locker room they had. They forgot to shake hands. It was just incredible. It was a great teaching moment, to never give up. I think the only thing that could be more incredible is winning a state championship.”

The Riverside Academy Rebels have quite a few of those, even if they’ve never needed a buzzer-beater to win one. Their closest state championship victory was 11 points when they defeated St. Thomas Aquinas, 60-49, in 2013.

That year also was the last time the Rebels were not the No. 1 seed going into the playoffs. That year they were No. 3. This year they are No. 2.

It’s not like the Rebels (25-5) didn’t try. After closing out the District 12-2A schedule as co-champions with Country Day, Riverside defeated University 86-81 and Karr 86-70.

A scheduled game against Country Day was canceled Saturday after it was determined that, even with a win, the Rebels wouldn’t have enough power points to unseat No. 1 seed Madison Prep.

“And it helped Country Day, so that was a good thing,” Byrd said.

It has been an unusual season for the Rebels in other ways. There was the season-opening loss to West Jefferson, then a loss to University, then another to Scotlandville. Riverside had not started a season 0-3 since before Byrd’s arrival at the school in 2009.

The slow start, however, could help the Rebels finish, Byrd said.

“Oh absolutely,” he said. “We had a slow start but we just got better and better. The schedule we were playing, we had to get better.”