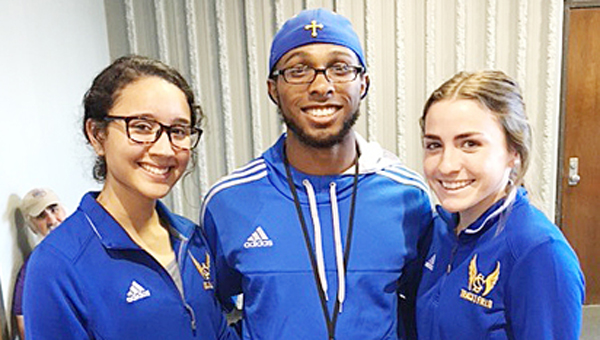 LAPLACE — In only his second year as the St. Charles Catholic High School track coach, Courtland Taylor made history. Or rather, a couple of his runners did.

Gabrielle Boesen and Victoria Portillo are the first Comets athletes to ever qualify for and compete at the annual Louisiana High School Athletic Association’s Indoor track meet, which was held Saturday at LSU.

Boesen, a senior sprinter, finished sixth in the 60-meter dash, running a time of 8.30. She qualified for the finals earlier in the day with an eighth place finish with a time of 8.24.

Portillo, a junior distance runner, finished 11th in the preliminaries with a time of 6:17.40. She did not qualify for the finals, but did achieve a personal best time, shaving seven seconds off her previous best.

“I’m really proud of these girls,” Taylor said. “They are the first in school history to qualify for the indoor meet.”

Both girls qualified for the meet at a preliminary event Jan. 23, but didn’t learn of their qualification until the middle of last week.

“Coach told me he thought I would make it, but I didn’t find out until, like, 9 o’clock Wednesday night,” Boesen said. “It was very exciting.”

Competing Saturday in Division II, which included all athletes from Classes 1A, 2A, B and C, Boesen ran the fastest time of any Class 2A athlete.

“If she had been competing against just Class 2A athletes, she would be a state champion,” Taylor said.
Portillo said she was proud of her performance, even though she did not qualify for the finals.

“I tried to set a new personal record and I did that,” she said.

Both girls said the indoor meet was very different from the traditional outdoor meets they are used to. The indoor track at LSU is half the size of a regular track. For Boesen, that meant a shorter sprint than her usual 400-meter dash. For Portillo, that meant eight laps instead of her usual four in the 1600-meter run. It also was a completely different atmosphere.

“I don’t think I’ve ever seen that many people at a track meet before,” Boesen said.