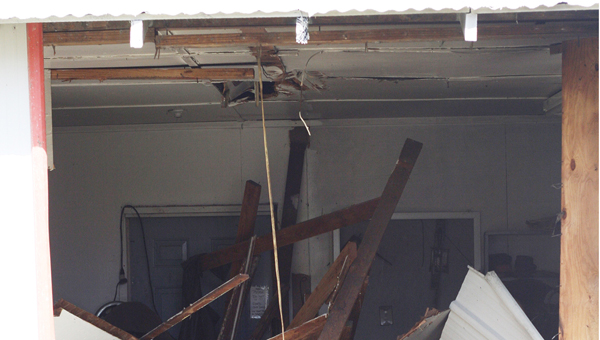 LaPlace’s Corey Mills was arrested after police say he caused damage, above, to Fobb and Sons Shoe Repair by driving a truck into the business.

LAPLACE — A local man is facing numerous criminal charges after authorities said he plowed his truck into a LaPlace building last week.

Corey Mills, 43, of LaPlace was arrested Thursday, charged with D.W.I., careless operation, driving with a suspended license and no seatbelt.

Louisiana State Police Troop B Spokes-woman Melissa Matey said investigators believe Mills was the driver and only occupant of a 2002 Nissan Frontier that lost control on the roadway at approximately 6:30 p.m. Thursday and rammed into Fobb and Sons Shoe Repair at 242 Cardinal Street in LaPlace, igniting a small blaze.

Mills, the only person involved or injured during the collision, suffered minor injuries.

Authorities believe impairment was a factor in the wreck, and Matey said toxicology analysis of the suspect’s blood is pending.

Herfert Fobb Jr. told L’OBSERVATEUR he received a call at approximately 8 p.m. Thursday alerting him a vehicle crashed into his shoe repair business.

Fobb said the shop has been closed since 2012 but was going to reopen within the next few months. With all of the repairs that need to be done now, he isn’t sure when the store will reopen.

“I just had the building repainted,” he said.

“Now there is a lot more work to be done.”

Fobb said authorities on scene indicated to him the driver was smoking Mojo, which authorities commonly identify as synthetic marijuana, before losing control of his truck.

Fobb said because the truck caught fire there was charring to some of the wood where the vehicle entered the wall and pieces of installation laying outside that were black.

Walls and doors destroyed, machinery moved from one end of the store to the other and a tear in the ceiling are just some of the damage Fobb cataloged last week.