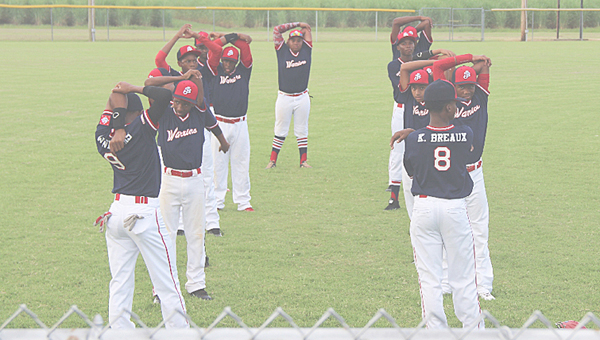 Members of the St. John Warriors warm up before a game in 2015. The Recreation Department needs coaches to lead this year’s players.

RESERVE — St. John the Baptist Parish Recreation Director Kerry Watkins is anticipating an increase in the number of youth baseball players this spring and summer. That’s the good news.

The bad news is the department does not have enough coaches to coach them all.

Watkins saw that happen in basketball season when 270 youngsters signed up for the youth program, an increase from 140 in 2014. Due to a lack of adult coaches, the program had to stop accepting applicants. No children were turned away, Watkins said, but some teams were stockpiled with players.

Watkins doesn’t want the same thing to happen to the parish’s budding baseball players. So, when he sent out the notice for baseball registration, he also put out a plea for coaches.

“We’re real desperate,” Watkins said. “We’re anticipating our numbers to increase in baseball like they did in basketball.”

The numbers went up in basketball, in part, because the St. John Parish Council voted to lower the registration fees from $35 to $15.  He expects the baseball numbers to rise, as well, because of the lower fees and the Parish’s switch from the Dizzy Dean Baseball League to the Babe Ruth League.

“More of our neighboring parishes play Babe Ruth than Dizzy Dean,” Watkins said. “This way our teams will be able to play more games in the River Parishes.”

Watkins said there were 138 players and 24 coaches in 2015. If the numbers increase in baseball, the department will need at least 50 coaches. Each team needs to have at least two coaches, he said. The number of softball players in the parish has traditionally been very low.

Reserve resident Eric Perrilloux has been a volunteer coach for more than 15 years and sees first-hand the need for coaches.

“We really lack coaches,” Perrilloux said. “We have more kids now than I’ve seen in a long time. We might have to put 12 or 13 kids on a team because there aren’t enough coaches.”

Perrilloux usually starts with a team when they are age 5 and 6 and follows them up through age 7-8. Last year he coached one 5-6 team and one 7-8 team.

“It’s just something I do,” he said. “It’s my passion. It feels good to bring a kid up from 5 or 6 and then they go on to high school and do good. When you run into them, they’re like, ‘Hey, Coach!’ That feels real good. I’d rather see kids doing something like baseball or basketball or whatever it is than out in the streets doing something they shouldn’t be doing.”

Coaches must be 18 or over and have to attend a class to become certified. The cost is $25.

“You just have to be willing to volunteer your time,” Watkins said.

Baseball registration for children ages 5-14 continues through March 3. The season begins in April and runs through June.

Registration forms are available at sbjparish.com or may be picked up at the Parks and Recreation office located at Regala Gym, 200 Regala Park Road in Reserve. The office is open from 8 a.m. until 4:30 p.m. Monday through Friday. The registration fee is $15 per child.