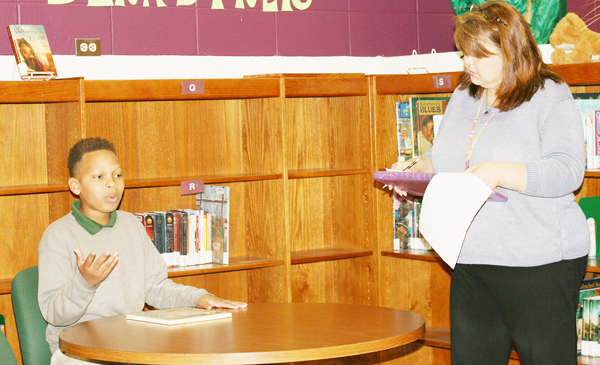 ECW’s ‘This Is A Test’ takes stage after May finals

LAPLACE — Emily C. Watkins Elementary student Donriel Smith, along with a handful of students, spends between 15 to 20 minutes each day before school rehearsing for an end-of-the-school-year production.

The play, “This Is A Test,” is about a young student named Alan, played by Donriel, who regrets missing a day of school where his classmates learned something important for a test.

“The kid is in high school and he is taking midterms,” Donriel said. “He comes to school everyday, but it just happens that he misses one day, which was the day they learned how to speak Chinese. That popped up on the test, and he becomes nervous because he doesn’t know to speak Chinese.”

Donriel said there is a connection with the students and the play because “This Is A Test,” slated for May, hits the stage after Emily C. Watkins students take their final exams.

Donriel, an eighth grader, got involved with the production as a way to show off his acting and comic skills.

“I’m kind of shy because I’m afraid of what other people will think, so I thought if I did the play and overcame my fear of shyness, it could make me more outspoken,” Donriel said. “It’s fun playing Alan. I like the fact that I was chosen to be the main character. It makes me feel good about myself.”

“When he auditioned he showed a lot of talent but also responsiveness to direction, which is something you really need in theater,” Tsuruda said. “You need a student or actor that can bring something to the play and also receive instruction and direction. Donriel was able to do both.”

Tsuruda said Donriel has shown a knack for bringing his character to life during rehearsals.

“When I ask him to change something or do something different, he is able to pick up on that right away,” she said.

Tsuruda, a former drama teacher, said the one-act production is a comedy her students can relate to and was a fun experience when she taught theater.

“It’s a very challenging play, because the nature of the play has lots of things going on at one time, but it’s something everyone can relate to,” Tsuruda said. “It shows the feelings a student might have when they aren’t ready for a test. I thought it might be nice to do after testing as a sort of breath of fresh air.”

Donriel enjoys giving up his free time in the morning to practice to learn his lines, which include a few words in Chinese.

“I found that I can memorize my lines faster than others,” Donriel said. “I’m most excited to speak Chinese in the play. It’s new for me and I’ve never done anything that like before. I think it will be a good experience for me to try something new. It’s not that hard because we aren’t saying hard, long sentences. One thing we learned was to say, ‘May I have another blue book please?’ A blue book is like Scantron.”