DHS pulls out win over ESJ 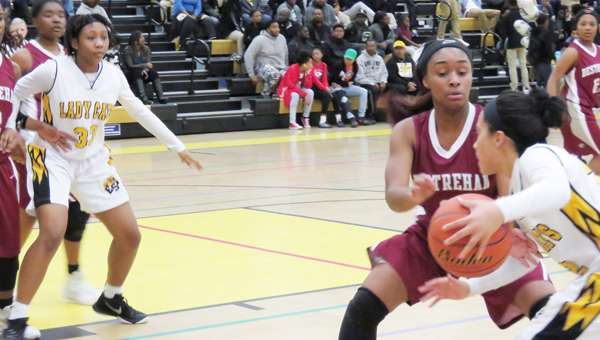 Kynedi Poullard looks to create passing to get the ball to her teammate Selena James, No. 33, during East St. John’s district battle against Destrehan, which DHS won. (Lori Lyons/L’OBSERVATEUR)

RESERVE — The first time East St. John and Destrehan met on the basketball court this season, it was all Destrehan.

This time, there was just too much Destrehan.

With a share of the District 7-5A title theirs for the taking, East St. John staged a mammoth comeback Friday attempt in the third quarter after trailing by 12 at the half. While the Destrehan defense bent, it did not give, and Destrehan came away with a 67-53 victory and sole possession of the district championship.

East St. John coach Stasha Thomas-James said she challenged her team in the third quarter after it let Destrehan roll to a double-digit lead.

Whatever she said worked.

The home-standing Wildcats outscored the visitors 19-12 in the third quarter with four 3-pointers and nine points off of turnovers. Kynedi Poullard hit three 3-point shots in the quarter, and Kyla Brumfield hit one to help East St. John whittle Destrehan’s lead to 48-43.

“We were well-prepared,” Thomas-James said. “We didn’t give up. I thought we played well.”

Meah Monroe led the scoring with 13 points, and Poullard scored 11 for ESJ. Ursin finished with 29 points for Destrehan.

On Feb. 2, the Lady Wildcats took a decisive 53-28 victory over Thibodaux. East St. John outscored the Lady Tigers 15-9 in the first quarter, 13-5 in the second quarter and held them to three points in the third.

Taylor Lipps led the scoring with 14 points, and Monroe followed with 10 points.

Poullard, Kayla Jackson and James all finished with seven points.

The Riverside Lady Rebels completed their sweep of St. Charles Catholic on Feb. 2, but had to fight hard get a 34-33 win.

At halftime, Rebels coach Kathy Luke told her team, “If it comes down to the end of the game and they’re in a 2-3 zone, we’re going to run Connecticut to win it.”

Imagine Luke’s shock when, in the final seconds, the Lady Comets went into a 2-3 zone.

St. Charles tried to answer, but Riverside stopped the attempt with a steal and won the game. Nora led the scoring with 19 points.

The Rebels (14-10) defeated Houma Christian, 53-34, on Thursday. They close out the regular season Friday at West St. John.

Riverside will go into the playoffs without shooting guard Ja’Keyra Gautreaux, who injured her knee last week.

The Lady Comets are still reeling from last week’s heartbreaking loss to Riverside.

St. Charles Catholic led to the very end — until the Rebels’ Nora scored in the finals seconds to give Riverside the 34-33 win.

Despite the loss, Comets coach Kim Nunez called it the best game her team played all season.

“I am very proud of our girls,” she said.

“We had a game plan and we stuck to it. Nora made a great shot with three of our players in her face to take the lead. I tip my hat to Riverside for not giving up, even though (they trailed) most of the game. If you weren’t at SCC (that night), you missed an awesome basketball game.”

St. Charles Catholic came back Thursday to take a 41-31 win over St. Mary’s Academy. Despite a scoreless first quarter and despite trailing through three quarters, the Comets rallied for the win.

The Comets (16-11) close out the season Thursday at home against St. Martin’s.

There has been good news and bad news for the Lady Rams.

The bad news is Lakendra Lewis is lost for the rest of the season. She tore her ACL on Jan. 22 in a win over St. Charles Catholic.

The good news is the Lady Rams are the District 12-2A champions.

Stevante Hamilton, who has been called upon to replace the injured Lewis, finished with eight points.