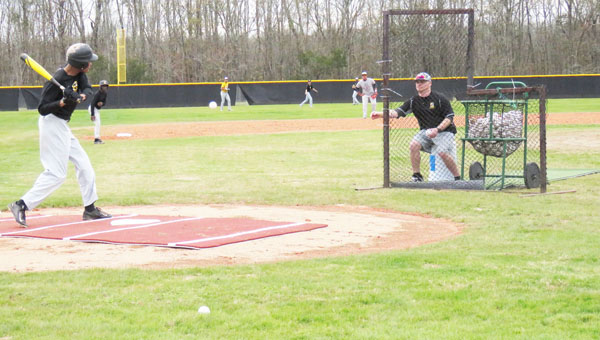 For the area’s baseball coaches, Monday couldn’t come soon enough. For Jade Falgoust, this season is the culmination of a long journey from Riverside Academy, where he spent his days as a player, to East St. John, where he takes over as a first time head coach.

He spent two seasons as an assistant under previous Wildcats coach Matt White, who left in May to become the head coach at McComb High School in Mississippi. The team went from 7-22 in 2014 to 14-9 in 2015 under the direction of White and Falgoust.

Falgoust said he is ready to take on the challenge. A standout athlete at Riverside, Falgoust quarterbacked the school’s football team and was part of the 2006 state championship baseball team. He went on to play at Delgado University in New Orleans, and later served as an assistant coach.

“I think we’ll pretty much continue on our destination,” Falgoust said.

It may be a rough road. The Wildcats lost five seniors from last year’s squad, including Phil Adams, who is now on the roster at Grambling State, and Ahmani Martin, who signed to play football for Nicholls State. Returning to this year’s lineup are shortstop C.J. Turner and Chase Henderson, who was the team’s full-time catcher last year.

“These guys, their sophomore year, they really struggled as a team,” Falgoust said. “Then, last year, they finally saw a light and had a winning record. They have a great attitude coming into this year. I really like this team and I’m really looking forward to it.”

Frank Cazeaux’s first year at Riverside Academy was a learning experience. New to the area and new to the school, Cazeaux spent a good bit of time just learning who his players were and how things work in the River Parishes.

“I really know the kids a lot better than the first time around,” Cazeaux said. “The goals are always the same — trying to win the state championship — no matter what team you’re coaching.”

Cazeaux just has to wait until basketball and soccer are done to get Loving and Gauthier, respectively. Loving is still recovering from a back injury that kept him out of much of the recent football season.

Comets coach Wayne Stein said he couldn’t wait for this week to get here. After the summer his American Legion team had, it’s easy to understand why.

Stein is hoping to carry on from the unprecedented success his summer team had, making the State Tournament for the first time in school history.

“It was an incredible summer, making it to the tournament for the first time,” Stein said. “It’s why we do Legion the way we do it, to prepare for the high school season.”

It’s all about experience. Stein returns 11 seniors and seven starters from last year’s 23-10 prep team. Among those is returning All-State outfielder Justin Loupe, who hit .437 with 37 RBIs and in his first season as a starter. Also returning is Zack Roussel, an All-State honorable mention, who pitched 68 innings and kept his ERA under 2.00 last season.

Key among the losses is, pitcher/infielder Austin Weber, who was 7-3 as a pitcher and hit .408 with 21 RBIs. He was the MVP on L’OBSERVATEUR’S 2015 All-Parish baseball team.

Another key loss for the Comets is one letter “A.” St. Charles dropped down from Class 3A to Class 2A this season, putting it back into a district with rival Riverside Academy.

A longtime volunteer assistant coach at West St. John, Greg Joseph could have walked away last year after his son, Juan Joseph, was murdered in a 2014 Baton Rouge shooting. But that would have left the Rams baseball team without a coach, so Joseph stayed.

Now in his second season as the head coach of the Rams, Joseph sometimes has to look for the positives, both on and off the field.

“Baseball builds character because it’s so darned hard to play,” Joseph said. “I want kids to realize that life is so much bigger than baseball.”

The good news is the Rams have 20 or so players planning to play this season. Of course, many of them are still playing basketball at the moment. And most of them haven’t picked up a baseball or a bat since last season ended.

“We’re probably not going to be fundamentally sound on defense,” Joseph said.

Among those players are senior pitcher Tommy Gauthier, a four-year player, and catcher Donte Gaudia.

“At least I have my pitcher and catcher,” Joseph said.

The rest will fall into place, he said. Last year’s team finished just above .500.

“I just want them to remember that, every time they put on the WSJ, they are representing an entire community, an entire school,” Joseph said.