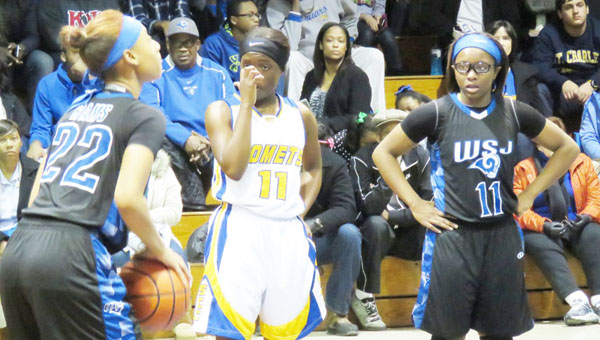 LAPLACE — The temperature outside may have been cold on Friday, but inside the St. Charles Catholic gym, the West St. John Rams were on fire.

West St. John took control of Friday’s District 12-2A contest from the tip-off and never let up on the way to a 59-27 victory. The Rams jumped to a very quick 18-0 lead and never looked back.

It also was the Maya Trench and Jaquana Hunter show, with the prolific duo scoring 18 and 21 points, respectively. The bad news is the Lady Rams lost Lakendria Lewis to a knee injury. She scored a lone 3 points in the first quarter.

“We played hard and forced them to turn it over,” Rams coach Lester Smith said. “We got a lot of easy baskets off of turnovers. We jumped on them early and, after that, they kind of lost their composure.

“The thing is, we’ve been playing a lot of tough competition. Going into this one, we’d lost seven games, but those seven games we lost were to good teams.”

Riverside Academy dropped to 1-2 in District 12-2A play with a 38-29 loss to Country Day on Friday. Dannecia Nora led the scoring with 12 points and had five rebounds.

The Lady Rebels (12-8) will close out the first round of district play Friday against St. Mary’s Academy. Riverside lost the first meeting of the teams, 43-42, on Jan. 12.  The team’s lone district victory came Jan. 15 against St. Charles Catholic, 55-38. That rematch is scheduled for Tuesdays in the Comets gym.