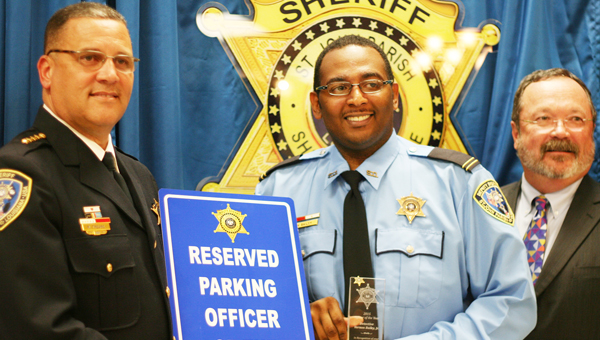 Detective Bailey named Officer of the Year, others honored

LAPLACE — Deputies from the St. John the Baptist Parish Sheriff’s Office gathered Thursday night to honor their brothers and sisters in blue.

Many officers were recognized as part of the third annual Officer of the Year Award Ceremony, but only one took home the coveted title.

Detective Vernon Bailey Jr. of the criminal investigation division is the 2015 Officer of the Year for St. John. Bailey has been with the Sheriff’s Office for nine years and was also the Officer of the Fourth Quarter for 2015.

Bailey said he was shocked when his name was called for the award.

“It’s very exciting,” he said. “I actually didn’t think I was going to get it, but hard work pays off — hard work and prayer. I work with great officers, hardworking officers, officers that would go out of their way to do good for someone else. I’ve done my job to the best of my ability and I got the award. I’m very excited about it.”

Bailey said he is a hardworking, spiritual guy who will help anyone in need, adding it doesn’t matter who it is.

“I would give the clothes off my back for someone,” he said. “That’s just the type of person I am.”

The Officer of the Year wants residents of St. John to know the deputies employed by the Sheriff’s Officer are hardworking men and women who do the right thing and are there for the community at all times.

That statement rang true as many other officers were recognized at the ceremony. Two deputies and a sergeant were recipients of the 2015 Life Saving Awards.

According to Lt. Greg Baker nothing stands taller on the pyramid of police work than saving lives.

“On August 15, 2015 Deputy Lisa Dorris had completed an escort to St. Joan of Arc when she was flagged down by bystanders and was asked to assist an elderly female who was not breathing,” Baker said. “Deputy Dorris notified headquarters and began CPR. While performing CPR Deputy Dorris noticed that the female had begun to take shallow breathes but was still unresponsive.”

Baker said soon the female was no longer breathing and had no pulse.

“Sgt. (Jason) Raborn arrived on scene and continued to assist Deputy Dorris with CPR until emergency services responded,” Baker said. “Later on that evening, Sgt. Raborn was advised by Ochsner Hospital that the female was physically and verbally responding to hospital staff.”

Several hours later, the elderly female’s sister asked to meet Dorris and Raborn to personally thank them for saving her sister’s life.

On the same day on the same shift, a K-9 officer in the Sheriff’s Officer saved life of a former law enforcement officer.

“Deputy Steven Dailey and Jonathan Walker were dispatched to Big Lots located on Airline Highway in reference to a male subject with a varicose vein that had burst in his leg,” Baker said.

The male, who was a 20-year retired NOPD officer, was standing in a large pool of blood freely flowing down his leg, according to Baker.

“The retired NOPD officer requested to apply the tourniquet himself,” Baker said. “After failing to apply it himself, Deputy Steven Dailey went into action and applied the tourniquet properly, stopping the blood flow.”

The subject went unconscious and was lowered to the ground by Dailey until the ambulance arrived.