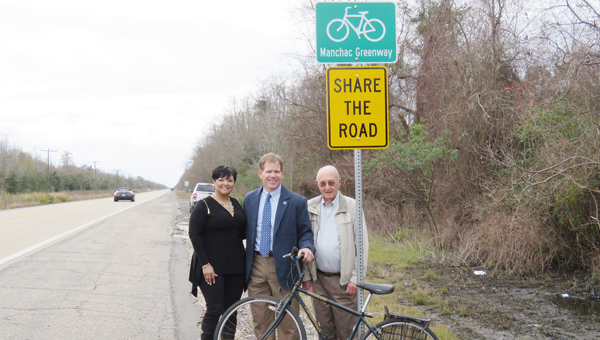 MANCHAC — For some folks, the goal is to ride a bicycle up one of the local levees.

Then there are the serious folks, those who would love to ride their bikes all the way around Lake Pontchartrain.

That may seem like a lofty goal, but it got one step closer to reality Thursday. The Manchac Greenway Project, a resident-led beautification effort, continued Thursday with the installation of signs making the old stretch of Highway 51 as an official bike path.

A host of government officials from St. John the Baptist Parish and Tangipahoa, including St. John Parish President Natalie Robottom, were on hand to mark the occasion, along with several project organizers.

“We’ve been working to build up the Frenier area for a while now to allow for all types of activities,” Robottom said. “We want to try to make it a safer place for people to walk, to run, to ride bikes. The signage is a big first step.”

Frank Neelis is a member of the steering committee and was among those who initiated the project more than a year ago.

“We want to take this stretch of old highway and turn it into a goldmine,” Neelis said.

Dan Jatres, the pedestrian and bicycle program manager for the Regional Planning Commission (and a biker himself), said there are many bike enthusiasts who would love a ride all the way around the lake.

It would also be a boon to tourism, he said.

“For most people, a ride around the lake would take two days,” Jatres said. “That means stops in some of the little towns, dining in local restaurants, a stay in a hotel or a bed and breakfast.”

The path also could attract larger groups, such as cycling races and even Ironman competitions. Local bikers are hoping to see the 26-mile road between LaPlace and Pontchatoula become a continuous bike path.

Presently, there is a small gap over a canal near the junction of Interstate 55 and U.S. 51. Bikers are not allowed to ride on the Interstate highway to get around it, so that’s as far as they can go.

Neelis said there is much more work to come. Eventually, the area will be paved and striped as a bike path, vegetation will be cleared and improved and paths will be built.

Jatres said he was not aware of any timeline for the project’s next steps, nor its completion. St. John officials are also unsure of a timeline.

Melinda Holloway of Hammond has ridden the current path and says it is quite an adventure.

“It’s scary,” she said. “But it’s one of the few areas with a shoulder to ride on. The signage is a good first step to help us be seen and to make motorists aware.”