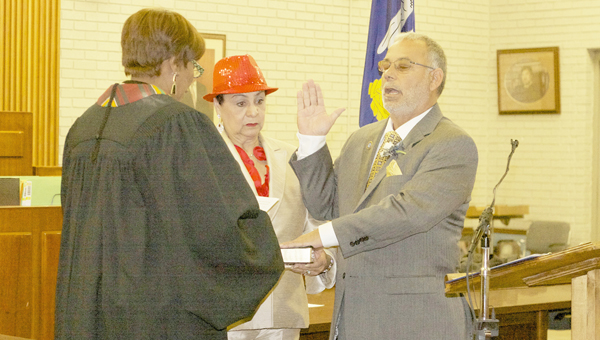 Larry Sorapuru Jr., Division A Councilman, takes the oath of office with his godmother, Patricia Dourclet, center, holding the Bible.

It was standing room only Monday morning at the St. John the Baptist Parish Courthouse in Edgard for the swearing in of Parish officials.

St. John the Baptist Parish District 7 Councilman Buddy Boe takes the oath of office Monday with wife Courtney Andersen Boe next to him.

A judge or District Attorney Bridget Dinvaut swore in everyone that took the oath, and the Bible they placed their hand on was held by someone special to that particular person.

Sorapuru said it was a good feeling being sworn in by Judge Madeline Jasmine, while his godmother, Patricia Dourclet, held the Bible.

“It was very heart-touching to see that many people come out to support us,” he said.

Sorapuru said it is an honor to have his godmother, the same women who Christened him, hold the Bible.

“It was wonderful,” he said. “My mother is deceased. My godmother filled my mother’s shoes. That was the brightest part of my day.”

Becnel said he was looking forward to the day he would be sworn as District 1 councilman, saying it was quite an experience.

“It settled in right after I sat down,” he said. “I thought, ‘Wow, I’m really a councilman now.’ Judge Jasmine swore me in, and my mother held the Bible. It was nice, a real pleasure to have her holding the Bible for me. It was beautiful just to have her there.”

Remondet had the support of her husband, Timothy, who stood by her side Monday morning.

“It felt great having him,” she said. “He worked hard with me in the election and he deserved to be up there with me. I appreciated that.”

Boe had his wife, Courtney, stand next to him while the District Attorney swore him in.

“It was a tremendous honor to have the D.A. do that for me, as the person that leads and works with the Sheriff to build a safer community,” he said.

After the ceremony concluded, the new members participated in their first Council meeting as a Council members. All seemed excited for the meeting and the things to come in the Parish.

Remondet, a former parish employee, said being on the elected side felt right.

“I feel that I can contribute,” she said. “As a former government employee, I see things in a different light than, I think, some of my fellow Council members. I can think of the problem but I also know what kind of work has to be done on the inside to get things done. I think it gives me a little bit of an edge, hopefully, and I’m ready to share that.”

Boe, who has administration experience in St. John and St. Charles parishes, is excited about his new role.

“I’m excited to work on big projects, such as the levee and a brand new water system for our people to have confidence in their drinking water,” he said. “I’m also looking forward to building economic opportunities for our entire community to keep people here and allow the youth of our Parish to see a future of opportunity in St. John Parish.”