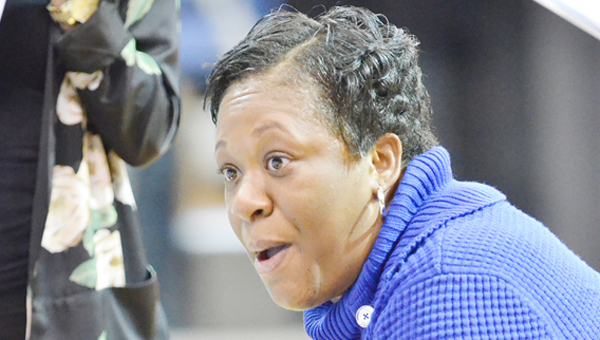 Back when she was a middle schooler at Leon Godchaux Junior High in Garyville, Davenport was “all about the band.”

A clarinet aficionado, Davenport was a happy little budding musician until St. John the Baptist Parish reshuffled its school districts. Davenport was sent from Godchaux to The Glade School where, according to her, the band just wasn’t up to her standards.

“They weren’t as good as Leon Godchaux’s band,” Davenport said. “So I tried out for basketball.”

And Davenport’s future was set. At The Glade, she was discovered by then-East St. John girls basketball coach Mark Larose, who saw something he liked. Together they worked to make her one of the best basketball players the school has ever seen. It wasn’t easy, Davenport said.

“I couldn’t walk and chew bubble gum,” Davenport said. “I began to work out with Coach Larose over the summer. By the time I got to East St. John, I was playing varsity as a freshman. That’s a credit to the work that nobody saw, Coach Larose and I doing work on Sundays. He taught me how to shoot.”

At East St. John, Davenport was a four-year starter and a two-time All-State selection. Larose was the coach during her freshman and sophomore years, then was fired not long after filing a Title IX lawsuit against the school system on behalf of his players. Davenport’s junior year was coached by Kathy Fayette.

Then Davenport quit. The word was, one of the boys’ assistant coaches, Troy Giordano, was to be moved over to coach the girls.

“I was so upset, I quit,” Davenport said.

But her then-boyfriend, Deon Davenport, a player on the boys team told his girl she needed to give the man a chance.

“He was like, ‘He’s a really good coach. I wish he was head coach of the guys’ team. You really need to give him a chance,’” Davenport said. “So, I went back and it was the best thing that happened to me. I only had one year with Coach Troy. I wish I’d had many. It took me time, but I’m just so grateful for every lesson that he ever taught me. I didn’t understand as a player, but I understand them all now that I’m a coach. ”

Giordano died in an automobile wreck in 2009.

Davenport graduated in 1997 as the school’s all-time leading scorer with 1,475 points — a mark broken the next season by Kinya Lennix. With Giordano, Davenport’s fellow Lady Wildcats recorded the school’s first women’s basketball district title and its first playoff victory her senior season.

Davenport went on to a stellar career at UNO. A four-year letter-winner, she started in 32 games, averaging 6.1 points and 3.6 rebounds over her career. Then she became a graduate assistant, then a third assistant coach (a position created just for her), then a second assistant coach, then an assistant coach. When head coach Amy Champion stepped down in 2011, Davenport became the first former UNO basketball player to be named a head coach.

“When I was entering the end of my playing career, I knew that I wanted to coach,” Davenport said. “I didn’t have any desires to go to the next level to play. I knew I wanted to make an impact on people’s lives the way that those two men specifically impacted my life.”

Now in her 13th year with the Privateers program and her fifth as the team’s head coach, Davenport, who married her high school sweetheart in 2013 and is now the mom of 9-month-old Deon Jr., is sharing the lessons she has learned with new generations of players. She is adamant about her students’ academic performance, as well as a strong proponent of community service for her players, who don’t always see success on the basketball court.

“I teach life lessons by using an orange ball,” she said. “I don’t recruit athlete-students. I recruit student-athletes. I’m most happy and humble about the lives that I’ve touched. For me, it has always been about more than basketball. It helps when you’re not having winning records to stay focused on why I do what I do. I have former players who are doctors, who are lawyers. I have former players who are stay-at-home moms — but she’s a darned good stay-at-home mom and you better believe she has a degree with that, too.”