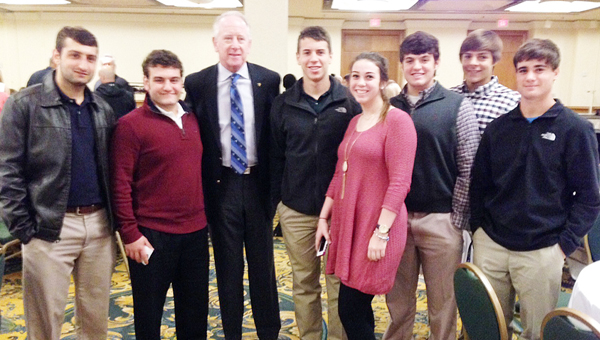 Reeves possesses the distinction of being tied for the most Super Bowl appearances in history with nine. As a head coach, he led the Denver Broncos to three Super Bowls and the Atlanta Falcons to one, as well.

Reeves spoke to the guests about the importance of never giving up despite whatever conditions one is given in life.

He touched on many of the hard lessons learned throughout his playing and coaching career and the importance of a dedication to a higher calling.

Ole Miss junior tight end Evan Engram shared a testimony of his faith and how it brought him through some difficult times in childhood, high school and college to get to the point where he is today.

St. Charles Catholic High School’s FCA group meets at 6 p.m. every Thursday under the direction of Coach Gary Zeringue. FCA is the largest Christian sports organization in the world and focuses on serving the school and community by equipping, empowering and encouraging people to make a difference for Christ.