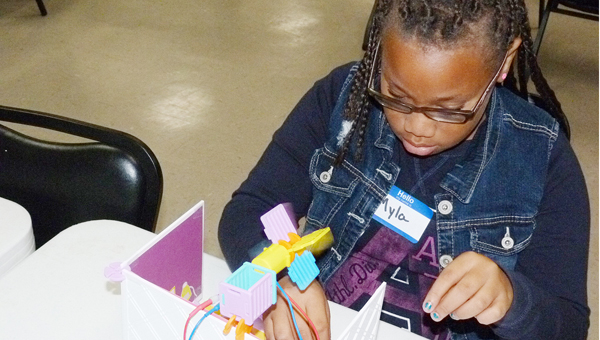 Chapters of the sorority across the nation keep those notions in the forefront by offering an academy to young girls as a way to cultivate their interest in engineering, math, science and technology. It is named in honor of Dr. Shabazz, wife of Malcolm X and a member of Delta Sigma Theta.

The River Parishes Alumnae Chapter of Delta Sigma Theta Inc. began offering the academy in 2011. The group meets the first Saturday of each month with girls ages 11 to 14 at Reserve’s St. John Parish Council on Aging.

“Technology is the future,” Delta Sigma Theta member and Delta Academy chair Sheena Diggs said. “We want to prepare our girls, who are underrepresented in scientific disciplines, to not fear science and, perhaps, nurture them into this direction.”

By participating in the academy, Lutcher resident Dionne McKinley built a working dollhouse.

“We read the instructions, but we, mostly, figure it out, and it works,” she said.

McKinley’s dollhouse has a functioning elevator, a spinning fan and operative lights. The best part about the dollhouse was the fact that she wired it herself. McKinley is one of 16 girls who participate in the Dr. Betty Shabazz Delta Academy sponsored by the Delta Sigma Theta Sorority Inc.

“The girls get to build dollhouses, which utilize building and construction techniques,” Horne said. “We, also, have a component where they have to wire the house. Lights, fans, elevators and other components have to work in order for the tasks to be deemed successful. We want them to get basic engineering principles down.”

Sorority members said they try to make activities at each meeting a fun learning opportunity.

This is the second year the local sorority received a Nalco Chemical Company, Inc. grant through its parent company, Minneapolis-based Ecolab. There are no charges or fees for participants, Diggs, said.

Delta Sigma Theta is a not-for profit Greek-lettered sorority of college-educated women dedicated to public service with an emphasis on programs that target the African American community.

Delta Sigma Theta Sorority was founded in 1913 by 22 collegiate women at Howard University. The sorority is incorporated as a private, non-profit organization of more than 300,000 predominately black college-educated women.

The Sorority has a long history of public service and civic involvement with over 900 chapters worldwide, Horne said.