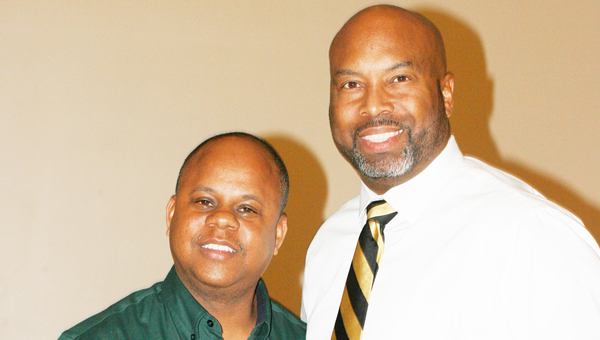 St. John the Baptist Parish School Board Member Shawn Wallace and Superintendent Kevin George were all smiles this at the Evening of Song, where George announced the School District earned an overall grade of B.

EDGARD — When speaking with L’OBSERVATEUR earlier this year about the success seen at West St. John High School, Erica Merrick recalled her own experiences in school.

“The reason I went to college and got my degree is because I had teachers that talked to me and explained to me the importance of being educated,” she said. “I just always felt like my teachers were classy, specifically, my African-American teachers. They used correct grammar. They drove nice cars, and they always took time to stress to me the importance of being educated and getting a job.”

Merrick said she used those early role models as guides, bringing that same approach to West St. John High School, where she worked for nine years, serving as principal through the 2014-15 academic year.

Earlier this year, Merrick credited a true community approach at West St. John High School, one that extended beyond students and teachers and into staff members, administrators, parents and local civic organizations, for success realized in state rankings and national recognition.

The good news gained momentum recently when Newsweek ranked the West Bank high school fifth out of 500 schools in the nation for “Beating The Odds 2015 – Top Schools For Low-Income Students,” recognizing “schools that beat the odds, performing better than statistically expected for their level of poverty.”

Then this month, West St. John High School earned an “A” in the latest Louisiana Department of Education accountability rankings. WSJH was a “B” school last year.

Louisiana grades schools on a 150-point scale. High schools use graduation rates and test scores, including the ACT, as factors in the scoring.

The grading scales are slightly different for elementary, middle and combination schools, but basically follows the same formula.

According to the Louisiana Department of Education, 8 percent of students are special education and 74 percent are economically disadvantaged.

Merrick said it’s a major advantage to have a student body with ambitions beyond high school and parents that don’t accept their child dropping out.

“That is not even an option,” she said. “The last nine years I was there, it was just awesome to be able to pick up the phone (and call a parent for help).

“I don’t just tell my kids to go to college. Some students, I realize, don’t want to go to a four-year school. They have to go get a trade. Not going further and getting something beyond high school is not acceptable. I don’t want to hear about it. I honestly get scared for them.”

The school put on a boot camp for students looking to perform well on the ACT and worked with ACT Mastery for mock tests and pre-test instruction.

“The requirement for the state is an 18,” Merrick said. “There were kids with 27s that still showed up that day to take the test. They all wanted to do better. That is what I felt was so powerful last year. Kids didn’t want to settle for the 18. It helps that they care.”

Another West Bank school, West St. John Elementary, also improved its score, jumping from a “D” to a “C.” The kindergarten through seventh grade school with 299 students scored 79.4, increasing more than 17 points from the 2013-14 period.

District 1 School Board Member Russell Jack, who represents the West Bank, said many West Bank graduates have returned to teach at the elementary and high schools and are very influential on students, spending extra hours tutoring at both locations.

“Students are just taking education more serious every year,” Jack said. “It’s becoming a huge part of our community. We have all these different civic organizations that go in and donate their time.

The St. John the Baptist Parish Public School District improved its overall letter grade to a “B” in the latest Louisiana Department of Education accountability rankings.

District officials stressed it is the first time the District has earned the “B” grade, scoring an 85.2 as its 2015 District Performance Score — an improvement over last year’s score of 83.1, a “C.”

John L. Ory Communications Magnet School earned an “A” (100.9) — a distinction it has maintained for four consecutive years. John L. Ory scored a 106.7 in 2013-14 for its enrollment, which features 462 students in grades kindergarten through eighth.

Another bright spot for the School District was Lake Pontchartrain Elementary School, which improved 15 points, going from a “D” to a “C” school.

“The big thing we believe in our district is collaboration,” Superintendent Kevin George said. “Often in schools people work in the isolation of their own classroom, in their own little silo. We believe when you put all of these people together to work on planning, assessments, instruction, you get the best practices of everyone. We really promoted that in mandating those meetings during the week. We make sure we’re talking to one another about what’s working best for each of us so we can all take those best parts and use them in our own classrooms.”

George said achieving a “B” was a goal, and the next step is an “A.”

According to the superintendent, the School District has a chance to capitalize on the rankings in the recruitment of new teachers.

“When you go to those job fairs, besides the money, the second thing asked is ‘how good of a school system is this?’” George said. “When we go to Nicholls or Southeastern or LSU or Southern to recruit teachers, we can say, ‘Do you want to come work for a B-ranked school system?’ Absolutely, it helps. That distinction carries a lot.”

“We’re working with the administration there to identify the problems and weak areas to help them create a plan to address those things,” George said. “You are going to see a lot of different things happen at Fifth Ward and Garyville as far as the resources that we pour into those schools.”

George said the key is creating a strategy and actively monitoring the plan put into place.

“That is definitely not a trend we want to continue, nor will we stand for it,” George said. “That is not acceptable results.

“The leadership will still be the same. We’ve had tough conversations with the administrators at both of those sites. They know where they are and they know how we feel. We’re going to support them, but at the same time, we have standards for our kids and our administrators. They have to get to that level.”

Some rain in New Year forecast