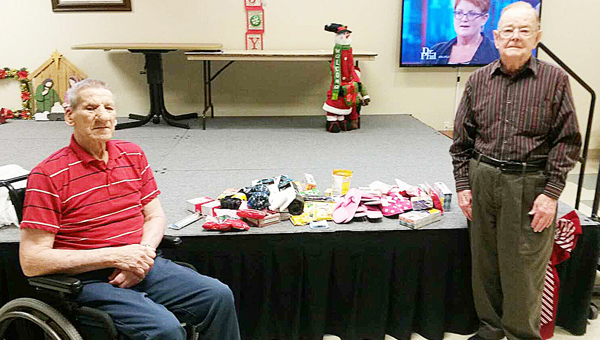 Willie Kliebert, left, and Rudy Baker, Southeast Louisiana War Veterans Home residents, pose next to some of the donations received at the Home this week.

RESERVE — It always warms Sonya Herbert’s heart when the residents at the Southeast Louisiana War Veterans Home have smiles on their faces.

A number of people dropped off donations Tuesday to the Veterans Home. Hebert, the recreational therapist, said when came into work Wednesday she was thrilled to see the Christmas spirit “in full force” at the Veterans Home.

One of the groups that brought items was Theresa Dunn and her family after collecting donations for a few weeks.

“They brought slippers, mints and little wipes,” Hebert said. “There were socks, Kleenex, soap and general things like that. These things mean a lot to the residents, these donations will last them through the whole year.”

Hebert said donations like the ones Dunn brought bring smiles to the faces of the residents.

“These things bring a lot of joy and comfort the them, it’s nice to know that they do have that object, that pair of socks or pair of slippers or the new soap they get to clean with,” she said. “It’s the little things that we take for granted that they appreciate.”

Hebert said she wanted Dunn and everyone else who donated items to the residents to know they are very much appreciated and needed.

“They make a difference in the Veterans’ lives,” she said. “The family members appreciated it, the staff appreciated it and especially our Veterans appreciated it. Like I said, it’s the little things that give them comfort and makes them feel appreciated and loved.”

Dunn said she didn’t collect the items for publicity, she just wanted to help.

“My coworker and I decided we wanted to do something,” Dunn said. “We like to do charity work around this time of the year.”

Dunn said different community businesses and community members teamed up with her.

When they dropped off the donations Tuesday night and walked around the Veterans Home, Dunn described the experience as “awesome.”

“We handed out Christmas cards and candy canes,” she said. “Then we brought in bags and bags of socks, slippers, toothbrushes and more. We had all kinds of stuff.”

Originally, Dunn was going to put the items in individual baskets, but was asked by the Veterans Home to put everything into large boxes because it would be easier for staff members to decide which residents could have certain items.

While they had a nice amount of items to donate, Dunn said she wishes they could have given more.

“I wish we could have had a little more community involvement, but we only had two weeks,” she said. “Next year, we’ll start a little earlier, maybe start in November.”

This is the first time Dunn has worked with the Veterans Home and she plans to do it again.

“I had a long talk with a retired general,” she said. “I also had a conversation with another gentleman who was in the Marine Corp. I wished them a Merry Christmas and thanked them for their service. We enjoyed the visit.”