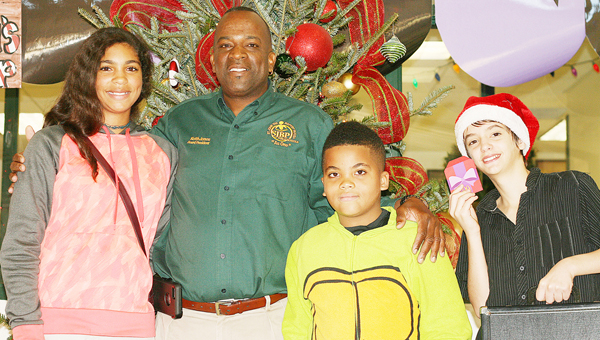 School administrators said the students were chosen because they were going through some personal issues — though details were not disclosed. Selected students included second grader Brad Wilson, fifth grader Ca’leigh Butler and seventh grader Eric Zar.

Ca’leigh was the first out of the three called to receive a surprise.

“I was very nervous when my name was called,” she said. “My friends had to push me just to get me up. I was scared because I don’t like to be in front of people, but I was pretty happy when I got the gift card. I’m excited for (the gift card for) McDonald’s.”

School principal Toni Robinet said the students were chosen because they have gone through serious personal issues and persevered. She said they deserved a little surprise.

Robinet said teachers who work with Ca’leigh on a daily bases say she is a model student in terms of doing anything asked of her.

“(Ca’leigh) is kind to her peers and not selfish at all,” Robinet said.

Robinet said Eric is a meek but intelligent student who enjoys school.

“He works hard to excel,” she said.

Concerning Brad, the principal said he is fun-loving, very inquisitive, huggable and loveable.

“He loves to engage in conversation, and he is happy to be at school,” Robinet said.

Robinet said she wants her students to know many in the community care about them, whether it’s friends, family, school staffers or community members.

St. John the Baptist Parish School Board President Keith Jones was the one who, out of his own pocket, bought McDonald’s gift cards and gave the third student a cash equivalent.

“I just wanted to do something for these kids,” Jones said. “Whether it’s losing a parent or (tough) living situations, those were the situations these kids dealt with.

Just seeing the smile on their faces when I presented the gifts was phenomenal. It gave me chills. Like the kids say, they got me in my feelings.”

Jones originally planed to present the students with a different surprise but those plans were derailed. Jones said he plans to have an annual “Keith Jones Christmas Giveaway at Emily C. Watkins” going forward.

The effort will be piloted at Emily C. Watkins before moving to other schools in the parish. Jones hopes other School Board members join the effort, adding it’s a wonderful feeling to give back.

Because it was a surprise, the young students didn’t know what was happening when their names where called to take the stage.

“They were very surprised, maybe they thought they were in trouble,” Jones said. “You should have seen Ca’leigh Butler’s face. It looked like she thought she was in trouble, but when she saw the gift card, she smiled.”