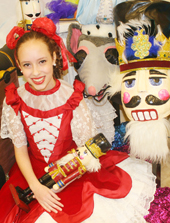 Grace Raymond 14, is taking center stage next week during the River Region Ballet’s production of ‘The Nutcracker,’ where she plays Clara.

DESTREHAN — Grace Raymond is thrilled to perform a role that follows in the footsteps of her two older sisters.

“This is truly a dream come true,” she said.

Grace, 14, is taking the stage in front of River Region audiences next week, starring as Clara during the River Region Ballet’s production of “The Nutcracker.”

Professional guest artists David Rochon and ToniAnn Chetta are dancing the roles of the Sugar Plum Fairy and Cavalier.

Grace, the daughter of Bobby and Johanna Raymond of Destrehan, is performing the role of Clara, a role her sisters have executed previously.

In “The Nutcracker,” it’s Christmas Eve and Clara is given a nutcracker as a gift from her godfather Drosselmeyer. Fritz is jealous of the toy and breaks it, and Clara is heartbroken. During the night when Clara goes to check on her toy, she finds the nutcracker has become life sized, and there is a battle going on between an army of gingerbread soldiers and mice, led by their King.

Grace started as the little girl in “The Nutcracker” and made her way through roles as a mouse, mouse lieutenant, candy cane, gumdrop, friend, snowflake and Arabian maiden.

Grace is an honor roll student at The Academy of the Sacred Heart. She studies dance at River Region Ballet School of Dance under the direction of ToniAnn Chetta and previously studied at Imagers Dance Studio for eight years.

She performed in ballets “The Sleeping Beauty,” “Peter and the Wolf,” “Thumbelina,” “The Fairy Garden,” “Cinderella” and “The Nutcracker.”

The River Region Ballet will also present a special children’s matinee at 2 p.m. Dec. 5, and presale tickets are $15. The children’s show is an abbreviated one-hour performance for younger fans and will be followed by a “Sugar Plum Party.”

Audience members will be invited to join the Sugar Plum Fairy onstage and experience “The Kingdom of Sweets” for themselves. They can meet and talk to their favorite characters, experience what it’s like to be on the stage under the glowing lights and take pictures.

Tickets may be purchased at brownpapertickets.com. All seats are reserved.

Tickets may also be purchased at the door for $25 for full-length performances and $20 for the Sugar Plum Matinee. Cash and Checks only are accepted at the door.

Each young audience member will be given a special gift to remember their Nutcracker experience.

Professional guest artists ToniAnn Chetta and David Rochon are dancing the roles of the Sugar Plum Fairy and Cavalier.

“There is new choreography throughout the whole production,” Chetta said. “We are trying to make it fresh and new.”

According to Chetta, choreography isn’t the only change the dance company is making to the ballet.

“We will also have some new scenery changes and new costumes,” Chetta said. “We’re trying to make it a little more exciting for the 2015 year.”

This program is supported by a grant from United Way of St. Charles; the Louisiana Division of the Arts, Office of Cultural Development, Department of Culture, Recreation and Tourism in cooperation with the Louisiana State Arts Council as administered by the Arts Council New Orleans and by the River Region Arts and Humanities Council.

Featured actors are Steven Fontenot as Uncle Drosselmeyer; Paul Sullivan as the Mouse King; Thomas Eli Brooks as the Nutcracker; Warren Hovis as the grandfather and Mother Ginger; Henry Sorbet as Mr. Silberhaus; Megan Harms as Mrs. Silberhaus; and Brenden Oster as Fritz.

Michel: Toddler’s view pauses whirlwind to give thanks