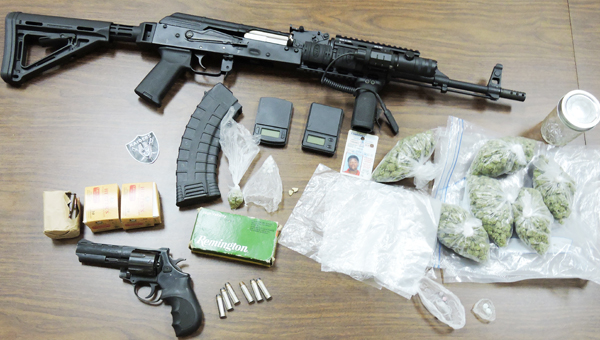 RESERVE — A tip from the community led authorities to a drug investigation, police raid and, eventually, the seizure of crack, marijuana and guns in Reserve, authorities said.

“If the citizens give us a tip, then we can do our job,” St. John Sheriff Mike Tregre said. “That’s what we need, tips from the community. If they give us tips, we have consistently shown that we will take care of business.”

St. John the Baptist Parish Sheriff’s Office narcotics detectives executed a search warrant Friday at a residence in the 100 block of East 20th Street in Reserve. The raid was the result of a four-day investigation that followed a tip from the public, Tregre said.

“Upon a search of the residence, detectives recovered more than 200 grams of high-grade marijuana (estimated street value – $2,240), three grams of crack cocaine (estimated street value – $360), an AK47 assault rifle and a .357 magnum handgun,” Tregre said in a release.“Upon the arrest of Jones, detectives found marijuana and crack cocaine packaged for street level sales in his pocket.”

Sgt. Dane Clement said the suspect was living at the home with his mother and two children.

Clement described the drug transactions coming from the home as “street-level,” adding the investigation did not discover any drug manufacturing at the location.

Tregre said he has been to the neighborhood since the raid and has received thanks for getting the area cleaned up.

“It takes time and patience, so that when we (make an arrest,) we have a very good case on them,” Tregre said. “My deputies sit out there in the rain, in the cold, daytime and nighttime, doing almost 24/7 surveillance, and they will never see us. They are determined to get the job done. When this case is presented to the District Attorney’s Office, the perpetrator will probably take a plea — that’s how strong our case is.”