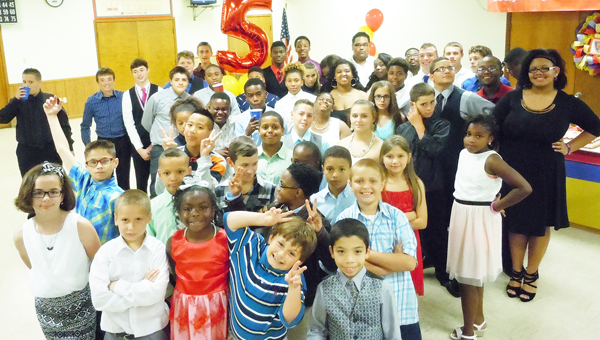 St. John Parish Young Marines take a break to pose for a group picture Oct. 17 during the Young Marine Ball, which was held at the Knights of Columbus Hall in LaPlace.

LAPLACE — As part of a national youth program, 65 local children and teenagers are dedicating their time to being part of the Young Marines.

As an organization, the Young Marines perform community service in St. John the Baptist Parish.

“(Fifty) hours sounds like a lot, but with the amount of things that we do in the community, that goes towards their community service hours,” he said.

One of the Young Marines’ main projects is participating in Veterans Day, which is Nov. 11.

“We host the parade and the celebration that takes place at the Veterans home in Reserve,” Bertrand said. “That day, the Young Marines are not going to be in school, they are going to be with me saying thank you to those veterans.”

“We can’t use the term ‘Toys for Tots’ — that’s a Marine term,” Bertrand said. “We call it Toys for St. John Kids, and it’s a huge success. Now we have different groups like church groups that want to jump on. The more, the better, so we can reach out to more kids. This year is going to be a great Christmas. We have at least six groups that want to jump in.”

The Young Marines also sell tickets for a raffle for a Raising Cane’s gift basket filled with gift cards and other goodies.

“We raffle the basket off for $2 or $3 a ticket,” Bertrand said. “The kids go out and do it, and every year we raise $1,000 from the basket. Then we go and buy blankets, slippers, socks and different things, and we bring them to the Veterans home. Every penny we raise from that raffle goes to them.”

Bertrand said the Young Marines do this because a lot of the veterans in the home are not from St. John Parish and might not have a lot of family that visit.

“We do everything we can to make sure they know they aren’t forgotten,” he said. “Anything we can do to help them feel a little more comfortable while staying in there, we are going to do.”

Bertrand said the group often makes trips to the Veterans home as a unit, but some also go on their own.

The unit also gets involved with Relay for Life.

“I was struck by cancer as my mother was taken from me in 2004,” Bertrand said. “My wife’s father was taken last year by cancer. We get heavily involved in it. Relay for Life is a good thing and it’s fun for the kids. While they are having fun, they know that they are making a difference. They are raising money for a good cause.”

According to Brian Bertrand, the Young Marines program started in Connecticut in 1959.

“There was a base there and there were some Marines that had some sons that were bored during the summer months,” Bertrand said. “The dads brought the boys on the base and put them in uniforms and taught them a few things like how to march and do drill. When Thanksgiving came around, the town has a Thanksgiving parade and the boys marched in the parade. The crowd loved them so much, other kids wanted to join. Here we are 2015 and there are over 320 units across the country.

“It instills a lot of the same things, as a Marine, we were taught,” Bertrand said. “The Marine core values are courage, commitment and honor. We have those same types of things we teach the kids, but the core values of the Young Marines are leadership, teamwork and disciple. These are things that these kids are going to use for the rest of their life. The Young Marines is not a recruiting base for any of the branches of service.