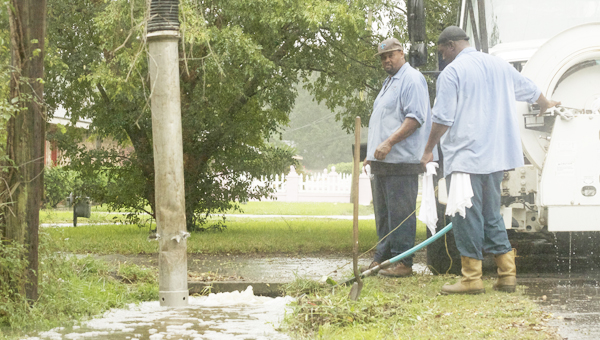 St. John the Baptist Public Works employees blow out a culvert Monday afternoon of any blockage to allow water to drain properly. Staff members were working on a culvert in front of a residence at 404 E 26 St. in Reserve.

LAPLACE — St. John the Baptist Parish has been experiencing flooding due to a low pressure system that brought in around 10 to 12 inches of rain, according to the National Weather Service.

According to Bill Grigsby, the heavy rains started Saturday evening then persisted throughout Sunday.

Grigsby is a forecaster for the National Weather Service in Slidell.

“As far as the radar estimates, it shows a band of rain that went across St. John the Baptist Parish,” Grigsby said. “It was on the border of 10 to 12 inches of rain. It varied based on where you were at in the Parish, but basically you guys got the worst of the rain across that part of South Louisiana.”

Grigsby said that places like Reserve, according to their radar, received 11 to 11.5 inches of rain, and the LaPlace area received around nine inches.

This rain was not just a little storm.

“It was two systems that merged,” Grigsby said. “You had Hurricane Patricia that hit the Mexican coast and it moved across Mexico and weakened. But the moisture associated with that storm managed to make it into the Gulf of Mexico at the same time we had another low-pressure system coming into Texas from the Northwest.

“They merged and formed a new low-pressure system, and it was still moving so we had a lot of persistence with offshore winds that brought a lot of water into the lake again. The lake was running three to four feet above average. That’s what lead to some flooding in the low lying areas.”

The National Weather Service anticipates skies to turn partly cloudy today with no rain and dry weather is expected Thursday and Friday. However, Grigsby said there would be another low-pressure system coming in Saturday. The system is coming in from California.

The average amount of rain St. John the Baptist Parish normally sees in October is 4.23 inches.

“This was a very strong gulf flow,” Grigsby said. “We do get these occasionally. Fortunately it didn’t have time to percolate into something a little more intense tropically. It was still quite a storm. Remember if you see water on the road the best advice is to turn around and find an alternate route.  You never know how deep the water is or if the road has been washed out or anything.”

Parish officials said the majority of flooding occurred on Sunday between 8 a.m. and 11 p.m. in River Forest, along U.S. 51 and in Mt. Airy.

More than 300 sandbags were also distributed.

Parish officials said a wastewater restriction was issued Monday and remains in place as of press time Tuesday at noon. Following heavy rainfall and infiltration, the wastewater system is operating at maximum capacity throughout the Parish.

Residents are asked to minimize the amount of discharge placed into the wastewater system in an effort to prevent overflows. Activities such as washing clothes, running dishwashers, flushing toilets, and all other activities that discharge into the collection system should be limited until further notice.

Taking showers and baths are not included in the conservation measures.

There are no water restrictions, parish leaders said, adding the water system is not impacted and the water is safe for consumption and normal use.