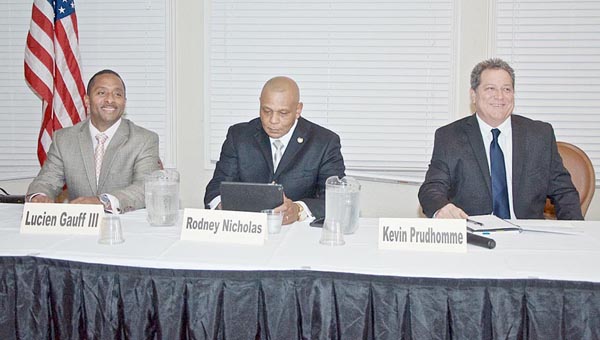 LAPLACE — Kevin Prudhomme said elections and voter turnout can play out any number of ways, but he was very pleased with Saturday’s results.

The candidate for St. John the Baptist Parish Assessor came out on top in a field of three, placing himself as the leader heading into Nov. 21’s runoff election.

Rodney Nicholas had a strong showing in third place, finishing with 3,072 votes (21.83 percent).

Prudhomme is a 15-year veteran of the Assessor’s office, where he currently works as deputy assessor and office manager.

“We had a good feeling we would make the run off, and I had a great turn out of support that shows I should be the next assessor,” he said. “I’m going to work just as hard as I always have. Since I started this, the message I always tell people is about experience. It’s experience that’s needed to run this office and keep the parish going in the right direction. I’m very confident that I will be the next assessor.”

Gauff, a current St. John Parish Council member, said he is excited he made the runoff, adding the numbers show there were three good candidates in the field.

“I thought there would be a higher voting turnout,” he said. “It’s going to be important to get people out to vote. That’s going to be the biggest thing.

“I feel really good and I feel excited about my chances. I’m still out there pounding the pavement. We need to get people out to vote. I think it’s important to reach out. There is still another 22 or 23 percent out there, and I need to make sure I touch those people. Hopefully, I can convince them I am the best candidate.”

Nicholas expressed his thanks to all who supported his campaign in a statement, adding he would continue to support excellence in education, collective bargaining, teachers, support staff, parents and children as “your elected representative on the St. John School Board.”

Nicholas declined an interview request from L’OBSERVATEUR and did not address the issue of an endorsement in an emailed statement to the newspaper.

“We live in the greatest country on the planet, and this election was the democratic process at its finest,” he wrote.

“I will always respect the right of the majority to govern.

“Congratulations to Mr. Kevin Prudhomme and Mr. Lucien Gauff III on advancing to the runoffs, and all of the other candidates parish wide who participated in the political process.”