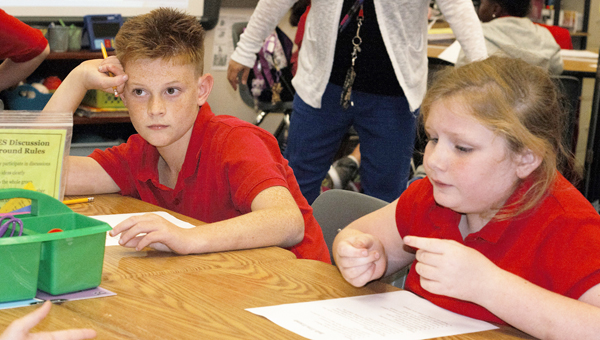 Fifth graders Peyton Jones, left, and Kaylee Landry discuss what they think the characteristics of a bully are during Wednesday’s Bullyfree Friends meeting at Norco Elementary School. (Raquel Derganz Baker/L’OBSERVATEUR)

NORCO — Thanks to the help of a former student, Norco Elementary School’s anti-bully club, Bullyfree Friends, is thriving in its second year.

Last year a student, who has since moved out of state, brought the initiative to the administration. The club went from 20 members in 2014-15 to having more than 40 this school year. Bullyfree Friends is made up of fourth and fifth graders.

Fifth grader Peyton Jones joined because he wanted to help students who are being bullied.

“So, I thought, I would join this club to help stop bullying,” Peyton said.

Peyton said bullying is physically being mean to someone or by using words and calling people names.

“If I saw someone being bullied, I would tell that bully to stop,” he said. “If they said no, I would run and tell an adult.”

“A lot of times it could be an older versus younger student, or someone who is seen as different,” she said. “It’s imbalance of power, and it has to be repetitive. We talk about teasing and how it can lead to bullying, but the only way you can really define it is if it’s something that is occurring over and over again within the same group of students.”

“Members were assigned younger grades levels; kindergarten, first and second,” West said. “They learned about a book that taught younger kids how to stand up for others or how to help a friend that was upset that day. Then members would go into the classrooms, read the book aloud and ask the younger kids questions and engaged them in a discussion and circled it around our four bully-free rules.”

The rules are: We will not bully others. We will help others if they are being bullied. We will include others who are left out. We will tell an adult at school or at home if we know of someone being bullied.

“Members painted them and came up with the designs,” West said. “The Bullyfree Friends club spent about seven hours on them last year. It’s to help students who maybe are being isolated on the playground or the cafeteria, and if they feel like they can go sit on the buddy bench and it’s a sign to the students that are around them that they need a friend.”

“We want the kids to be the ones out there standing up for one another without us telling them to do it,” she said. “We want to give them the skills and teach them how do deal with bullying in a safe way and have the courage to do it.”

West truly feels the club is bringing awareness to the school.

“We want to incorporate some buddy patrols,” she said. “We want the Bullyfree Friends members to team up during recess and walk around, as part of that buddy patrol, to make sure that nothing is happening. I feel like having them taking action, as opposed to having adults doing it, is really going to decrease bullying. We really do see a limited about of that around here now.”

During the club’s first meeting, which took place after school Wednesday, members were asked for ideas for bully-free posters.

“They are designing a bulletin board,” West said. “It’s going to be in the cafeteria. We have the four bully rules that will be in the center. We asked them to design a symbol, sketch a scene or come up with a quote that goes along with each of those rules. Once we pretty them up, we are going to put them up there for everyone to see.”