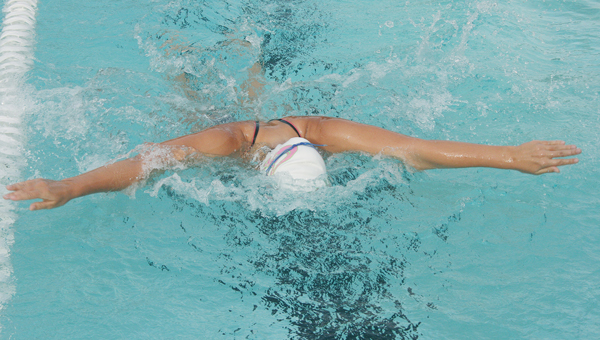 St. Charles Catholic swimmer Grace Richoux practices Thursday for the upcoming district and state competitions. ‘Swimming is everything to me,’ she said.

“Only some of my boys are going to be competing,” said SCC swim coach Michelle Jensen. “None of the girls are competing because it’s the same day as homecoming. They want to have time to get ready and not be rushed from swimming all day.”

Jensen said the team doesn’t need to have certain times to attend district.

“The goal of district is to see how many kids can qualify for state,” Jensen said. “You don’t need to have the best times to be able to swim in district.”

This year’s district competition will be Oct. 22 at the University of New Orleans, and SCC swimmers are practicing four days a week in preparation.

Jensen said while she would like to have every team member compete in the district meet, she has too many girls for all of them to participate.

“We have fewer boys, so most of them will compete,” Jensen said. “We can only have four swimmers compete in each event, and each team member can only swim in two events and two relays.”

Jensen said she has several boys coming back to the pool after suffering injuries.

“Several of our boys are also football players,” Jensen said. “We have a couple recovering from shoulder injuries from football. (Senior) Justin Dubose won’t be able to compete at district or state. It’s sad because he is a senior, and this is his last year.”

Jensen has more than just football players on the swim team.

“I’d say 75 or 80 percent of the team is involved in a least one other sport,” Jensen said. “We normally have practice at 5:30 p.m. so all the football boys can make it after football practice. They finish practice early on Thursdays, so we have practice at 4:30 p.m. We also have cheerleaders, volleyball players and baseball players.”

One of those multi-sport athletes is junior Rhett LeBlanc, who has been on the swim team for two years, but has been playing football for three years.

“I was going to join the swim team my freshman year, but I didn’t think I’d have time with football practices,” LeBlanc said. “But I saw other people doing both football and swim, so I joined.”

LeBlanc said he also is a catcher for SCC baseball.

“I’m probably better at baseball than swimming,” LeBlanc said. “But I’m trying. I really like swimming. I haven’t made it to state, yet, but I’m working on it. I think I’ve improved enough. My goal is to make it to state and see how I do from there.”

St. Charles Catholic sophomore Grace Richoux lists swimming as her only sport, but mostly because it takes up all of her time.

Richoux said she is ready for district, but isn’t worried about qualifying for state.

Richoux said she has lofty goals for state this year.

“I want to place third or higher,” Richoux said. “I definitely want to better my time. I’m definitely passionate about what I do. My whole life is swimming.”

Jensen said her swimmers are getting stronger and faster each year.

“We need them to be strong and fast because we are swimming in a very difficult district,” Jensen said. “These teams are the same ones we’ll be up against in state. Luckily for us, swimming against these great teams before state gives us a good idea on how to place our swimmers for state.”

SCC junior Rhett Leblanc practices for the district meet Oct. 22. His goal for district is to qualify for state.