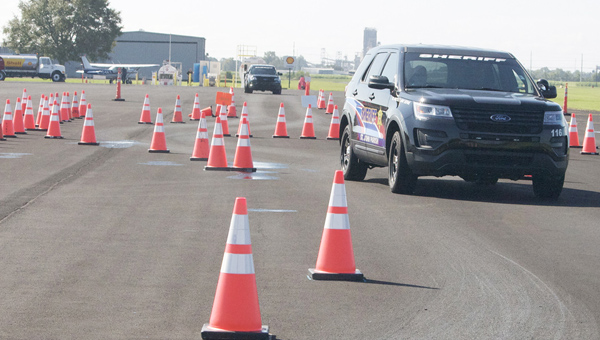 A St. John the Baptist Parish Sheriff’s Office deputy, above, goes through a driving course/

RESERVE — As part of the an agency sponsored driver certification course, deputies and patrol officers from the St. John the Baptist Parish Sheriff’s Office completed an Emergency Vehicle Operations Course.

“We were having some accidents with the units and we’ve never had driver certification,” Sheriff Mike Tregre said. “I got with the State Police and asked them how they made their drivers better. The State Police have a course for all of their troopers, and I sent my officers there to get certified. We brought a portion of that certification back.”

Three instructors, including Lt. Chip Wale, brought back the information they learned and transformed a portion of the St. John Airport last week into a driving course. Tregre said he drove the course multiple times and really enjoyed it.

“My officers need this type of training to help them become the best distracted drivers in the business,” he said.

Wale said the course provides deputies an opportunity to gain the tools needed to drive within the parish safely and effectively, “whether it be high-speed stuff or backing in and out of a parking spot.”

Wale said most of the wrecks officers are involved in are low-impact velocity wrecks caused by backing up and hitting something. They hope to reduce wrecks as much as possible.

In order to pass the course, drivers had to complete the driving course in three minutes without hitting a single cone. If a cone was hit, they had to start from the beginning.

In all, 85 deputies passed and completed the course, which had a classroom element and a driving-course element.

For the driving portion, the course was broken up into different sections.

“They get up to a certain speed, because it’s so narrow and so small we only have them go up to 35 mph,” Wale said.

“They come though at 35 and have to make an emergency decision at three cones. There is an instructor in the car with them, telling them which way to go. Then they had to accelerate out and around the obstacles.”

Next, drivers navigated through a few hairpin turns.

“They have to show straight line breaking,” Wale said. “They have to keep control without going into analog. That’s when the brakes grab and release even when you slam on the breaks. We don’t want them to come to that point.”

The instructors wanted drivers to know they can control the car through turns even at high speed without hitting anything.

The second portion of the driving course focused on reversing. Drivers navigated through a “narrow alley” made of cones, a 90-degree turn, pulled into and backed into a space and maneuvered around cones in reverse.

Wale said after the fourth or fifth time attempting this part of the course, drivers do it perfectly.

Once drivers proved to Wale they completed the drill perfectly they moved to the T-box and the serpentine section. In the T-box, drivers learned how to use their large vehicles and work with the space it occupies. For the serpentine, drivers kept both hands on the wheel while turning.

Lt. Richard Dubs, another one of the instructors, felt the deputies worked well through the course.

“The officers are getting a good feel of all of the aspects of driving, so they understand their vehicles and how they react,” Dubs said.

“I think it will be better and safer for the public.”