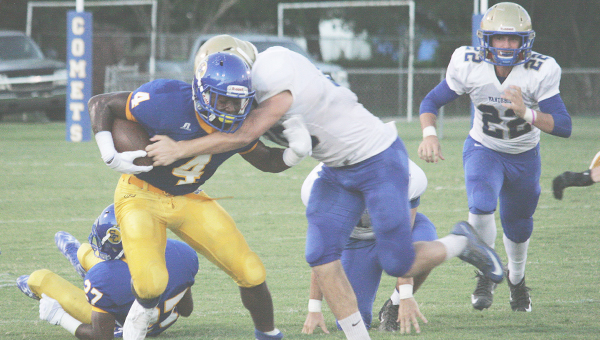 SCC’s Eric Lewis shakes off a tackler during a punt return. St. Charles Catholic has scored 108 points to their opponents’ seven in the first three weeks of the season. (Kyle Barnett/L’OBSERVATEUR)

LAPLACE — The St. Charles Catholic High Comets will meet their football match Friday with a home game against the 5A Central Baton Rouge High Wildcats.

The Comets have already shut out Thibodaux and Thomas Jefferson by scores of 31-0 and 36-0, respectively, and allowed Vandebilt to score one touchdown in a 41-7 victory last week.

This Friday will be the Comets’ first time playing the Wildcats, whose record this season is also impressive with two wins and a single loss by just a touchdown.

“We don’t match up well with size and speed,” said Frank Monica, St. Charles Catholic head football coach. “Central Baton Rouge is a bigger school. We’ll need to work hard to keep up with their offense’s speed and especially their quarterback.”

Monica said the outcome of Friday’s game would be difficult to predict. Although St. Charles Catholic is a 2A school, it has defeated larger schools for the past three weeks.

“We can’t give up big plays if we want to win,” Monica said. “We have to take care of the ball. We’re going to have to play over our heads to get a win.

“We will have to play all three phases well to win — offense, defense and special teams,” Monica said. “We have to be solid in all three phases. Offense has to be methodical in everything they do. Defense needs to make sure not to give up too many yards. Special teams needs to negate return yards. If we can do all this, we have a chance to win.”

The Comets will play at 7 p.m. Friday at their home field.

EDGARD — The West St. John Rams  (2-1) are traveling Friday to play the Kentwood Kangaroos (2-1) on their home field in Tangipahoa Parish.

Both teams are coming off of losses last week and have something to prove this Friday.

“After suffering a loss last week,” said Brandon Walters, West St. John head football coach, “the players are inspired to win. They are preparing today and feeling confident. They are pretty focused to accomplish what they need to do to win on Friday.”

The Rams fell to the Southern Lab Kittens last week in their first loss of the season. Walters said they should have won, but let the game slip away.

The Kentwood Kangaroos suffered their first loss of the season last week against their rival, the Amite Warriors.

“We haven’t played Kentwood in four to five years, maybe more,” Walters said. “These high school teams play big. Classification doesn’t matter. Nothing matters. We’ve beaten bigger schools. So have (the Kangaroos.) As long as I can get them to do their job, it’ll be a good night for us.”

“The offense goes through him,” he said. “He is the go-to guy for their offense.”

Walters noted a few of the Rams’ defensive lineman will need to step up to secure a win this week.

“Linebacker Nicholas Borne has 15 or so tackles under his belt so far this season,” Walters said. “Jamal Walters is also doing really well. He puts up a good defense. With them and the rest of the defense, we should be fine.

“All we have to do is focus on the execution. If we can concentrate on those things, we will pull off a win.”

Rams falter in red zone, on special teams in…