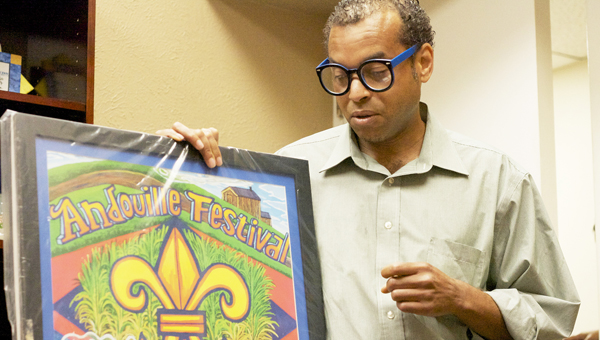 Local artist Jamar Duval Pierre had the opportunity, once again, to create the poster for the St. John the Baptist Parish Andouille Festival.

Posters are available for sale beginning Friday . One hundred signed and numbered festival prints are being sold for $75 each.

His original, hand-painted design was unveiled to the public at a ceremony Monday, serving as a visual keepsake for the 42nd annual festival.

The festival poster practice had been discontinued, but was brought back in 2013.

“As a Louisiana artist, I have so much inspiration for the poster,” Pierre said. “I feel I have a responsibility to preserve our Louisiana heritage and culture.”

Pierre has over 20 years of professional visual art experience with a portfolio that encompasses corporate and private commissions, public murals, official posters, set design, album covers and product advertising. With his latest offering, he has created three Andouille Festival posters.

“As a local artist, I have a responsibility to inspire my audience to celebrate our ‘joie de vivre’ (enjoyment of life) while still showing respect to our waterways and historical southern Louisiana recipes,” Pierre said.

The St. John the Baptist Parish Andouille Festival, slated for Oct. 16-18 at the St. John Community Center in LaPlace, will feature food, good music and an overall enjoyable time for all ages.

Pierre said members of his family, who are from Edgard, have been making Andouille sausage for years, adding he is also learning how to make the famous sauasage. However, out of his large family, he says he is one of the only people interested in preserving the culture by learning to make the sausage.

According to Pierre, creating a poster design is a long a process, taking weeks to complete. Pierre first creates three small, different paintings by hand, and then shares them with Parish administration. After some discussion, elements from all three paintings are combined into a final product.

The original acrylic-on-canvas painting, which is a 36×48 painting, was bought by the parish Monday and will hang in the office. One of Pierre’s original poster paintings from a previous year hangs in Parish President Natalie Robottom’s office.

While Pierre loves all the posters he has done for the festival, he explains this year is a little different.

“It’s more vibrant, and there is a more colorful subject matter,” Pierre said. “It’s almost like a poster for Jazz Fest.”

Pierre seemed excited to talk about the final design.

“This year’s painting shows the smokehouse for the Andouille, the river, which is a major landmark in our parish, the Fleur de lis, sugar cane, gumbo with Andouille sausage, okra and seafood,” Pierre said.

Pierre said he loved creating the poster for a festival in a parish that he loves.

“I’m preserving the culture of St. John Parish and I’m passing it down to the next generation,” Pierre said. “I want people to know that St. John the Baptist really is the Andouille capital of the world, and our traditions are being passed down.”